Handsome Governor Peter has been plotting to make Lu Ann his First Lady for some time, but clearly he’s been waiting for the perfect moment: at an extremely public event, in front of New York’s social and political elite, so that saying no will be incredibly humiliating and awkward for everyone involved. I thought Paul Linksy won the Using Social Pressure To Force An Ambivalent Lu Ann To Marry You Lifetime Award for all time when he surprise-proposed to her in front of his chanting extended family on the 10th anniversary of 9/11, but the governor is on the verge of really taking things to the next level here, what with all the reporters from major media outlets in attendance. 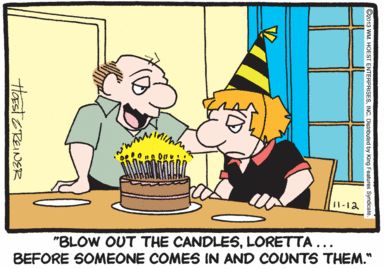 The best part of this comic is that there doesn’t actually seem to be any party going on here! Just Leroy lighting up a crapload of candles on Loretta’s birthday cake, so he can insult her. Probably he gave her the hat, too. Probably she was excited for maybe as much as 30 seconds, because she thought Leroy actually arranged a nice little moment for her on her birthday. Probably we’re seeing her face settle into an epic Locknornean frown just at the moment when she realizes, again, that her life is nothing but a series of bitter emotional disappointments.

Do you enjoy people vaguely flirting by naming different American regional dishes? Then today’s Blondie is for you, my friend!