Rex and June, who are married to each other, and have been for some time, and they were co-workers for a while before that, are meeting up with one of Rex’s high school buddies, which gives them an opportunity to … talk about Rex’s high school dating life? Which apparently they never had before? This strikes me as kind of weird, but maybe lots of people don’t want to know about their partner’s early romantic experience. Or maybe Rex has a good reason in particular to never talk about it. “I was cheerleading captain my senior year, and I dated a couple of cheerleaders, simultaneously. Well, ‘dated’ might be the wrong word, more like ‘brainwashed them and indoctrinated them into my sex-death cheerleading cult.’ And, yes, the reporters may have compared me to Charles Manson, but the big differences between me and Manson is that I wasn’t dumb enough to make the swastika on my forehead permanent, and also all the records were sealed, because I was a juvenile. Wait, maybe there was a reason I never told you about all this before.”

Has anyone considered that what Spider-Man has been overselling as his “spider-sense” is actually just what the rest of us call “irritation?” 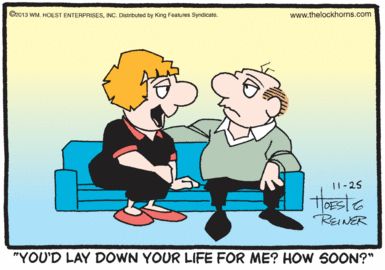