Good news, everybody! The Tarantula and Spider-Man defeated El Condor, and the Tarantula was all about restoring democracy to Costa Verde and holding free and fair elections, but then like forty guys who showed up in the capital to watch El Condor’s arrest shouted that Tarantula should lead them, so now he’s going by “Mr. Presidente” and striking a Jesus Christ pose in front of his fanatical followers. ¡Viva la revolución! Anyway, Spidey, having encouraged Tarantula’s coup, is now enjoying some of its sweet, sweet material benefits. “Whoa whoa whoa, I get to fly on a plane while lying on a couch? This is amaaazing!” 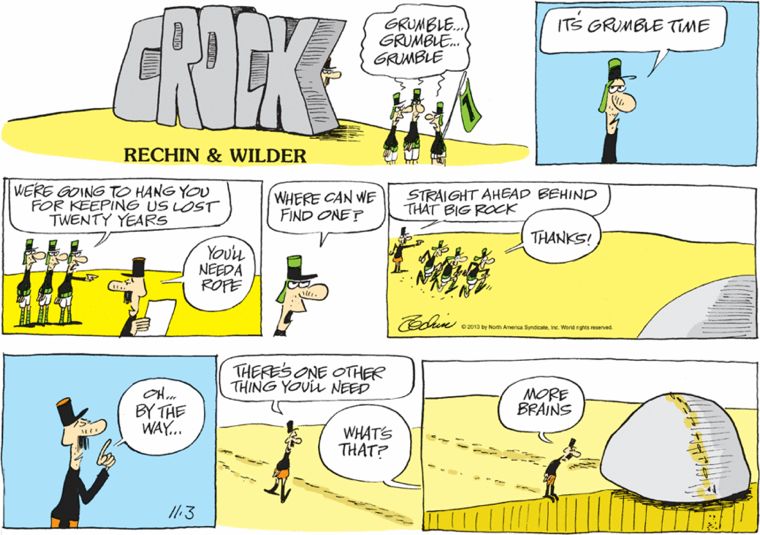 Speaking of violent revolution, years of privation and failed leadership have finally broken down military discipline in the Lost Patrol. The angry men plan to lynch their leader, only to be killed themselves by a stratagem of the brutal commander they hate so much. It’s OK, though, because this bloody conflict has been given the cute name “grumble time!” Ha ha, those kooky grumbling starving murderous legionnaires!

I’m not sure what I love more about today’s Hi and Lois throwaway panels: that Chip (estimated birth date: 1997) is waxing nostalgic to his little sister about the cocaine-fueled glory days of the ’70s New York disco scene, or that Dot, sullen and angry at having been confronted by an unfamiliar cultural reference, calls him “chip dip” in her head. I for one will be responding to things I don’t understand with “Whatever that means, chip dip” from now on.