I think “Bertha Bear broke out of prison” should go down among the great opening lines in the history of fiction, along with “It was the best of times, it was the worst of times” and “A screaming comes across the sky”. What was she in for, how long did she have left in her sentence, and how did she escape? Unfortunately, none of these questions are answered in today’s strip, although we do at least get an appropriately cluttered vision of an abandoned house in the Slylockverse. The two things I enjoy most about today’s mystery are (a) that the solution hinges not on some confirmable scientific fact about real bears in our universe, but rather anthropomorphic cartoon bears’ well-known predilection for carrying around large, well-labeled jars of honey, and (b) that Bertha Bear is right there, at the lower left, her head sticking out of the floorboards, looking pissed. “Yes, what, honey, are you kidding me? Just arrest me and take me back to the big house and get this over with already, Jesus Christ.”

The little dance Mary is doing here as she balances her lust and her status-seeking strikes me as extremely revealing about her character. On the one hand, she obviously finds Ken to be a very attractive slab of Broadwayman, and can’t resist bragging to Shelly that she’s about to be squired about New York on his sexy, sexy arm. On the other, the fact that the voice that made him famous is now no more is obviously a source of great embarrassment to her, because what’s the point of bragging about Ken Kensington’s attentions if he can’t even sing? “Less song in his voice” seems like an extremely minimizing way to say “botched surgery destroyed his career.” I look forward to the moment later in this plot when Shelly urges Ken to sing a few notes over dinner! The resulting social awkwardness should be excruciating for everyone involved. 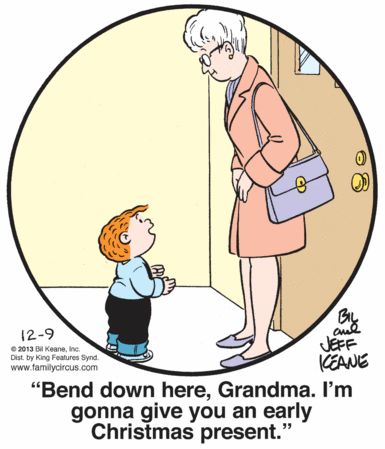 You know, I tend to scoff at people who get worked up about how there’s too much time today spent boosting kids’ self-esteem, but if a child as gross and unlikable as Jeffy thinks that a hug and a kiss from him represents of gift of any sort, maybe we have gone too far.