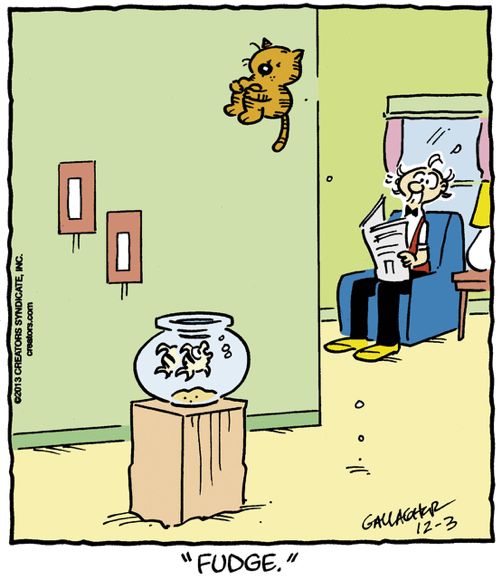 Well, congratulations, Heathcliff: you did a panel where the whole joke is that Heathcliff is about to cannonball into a fishbowl barely bigger than he is, and the fish in the bowl can see him and know they’re about to die gasping on the carpet after their whole world is obliterated in a flurry of yowls and shattered glass, and so one of them, as presumably his last act on this earth, just says “Fuck.” Oh, I mean, “fudge,” obviously, except in my experience “fudge” as a minced oath only ever means “I almost said ‘fuck’ but then realized I was in a context where that was inadvisable, like, say, a nationally syndicated newspaper comic.” It seems appropriate, anyway, given the gravity of the situation from the fish’s perspective, although there’s a pretty good chance that Heathcliff might miss the bowl entirely from this distance.

The great thing about being a villain in Mark Trail is that when you’re a villain in Mark Trail you’re a villain, by God. None of this “likable antihero” or “moral ambiguity” nonsense, which is for college professors and other sissies. It can take a little while for the humans to figure it out, but Andy has these guys’ number and is already trying to attack. Even Mr. Dunlap’s delicious homemade syrup (or, as I like to call it, “flapjack juice”) physically leaps out of Jared’s hand, refusing to grant its power of deliciousness to such a ne’er-do-well.

In all honesty, I don’t really care that much about whatever harebrained artifact-napping schemes Jeff and Jared have cooked up. All I want is for Mr. Dunlap to wander around spouting off declarative sentences for as long as possible. “He’s staying at the museum! Homemade syrup is great on flapjacks! Suspenders hold my pants up! I like saying things!”

Ha ha, it’s the Funkyverse so even the puns are horribly depressing. “There’s no therapy dog? But … I’ve been waiting all week for this! It’s the only thing I’ve had to look forward to! I love dogs, I had dogs my whole life, but I can’t keep one in here. My family never visits me. I just want something warm and friendly and good that will touch me and love me unconditionally. What am I supposed to do with a bunch of fucking flowers?” 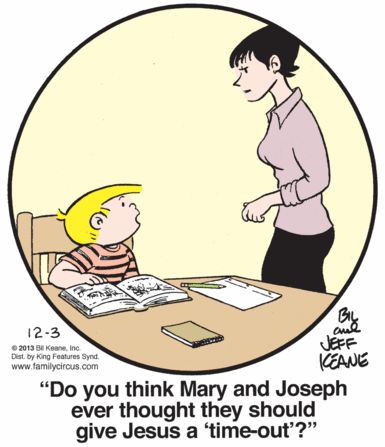 Years later, when Billy was on trial for the various crimes he had committed as leader of the notorious Real Presence of the Manifest Messiah cult, and he took the stand in his own defense, ranting and raving that he was the son of God and no Earthly court could judge or punish him, this moment at the table came rushing back to his mother with terrible clarity.