It’s the final day of the Comics Curmudgeon Spring 2014 Fundraiser! Make a generous donation now, then enjoy your official CC tote bag or refrigerator magnet for all eternity!

I always knew it went something like this. The grinning, disfigured jester, seducing his unsuspecting queen into forcing her court monks to create a new font, an abomination whose every blasphemous curve traces the foul arc of Baphomet’s own horn. The trembling monk, sighing “Yes, Majesty” as he struggles to ignore far-off laughter and the whiff of sulfur rising from his quill where it scratches the parchment.

The original joke, “I don’t need to outrun him, I just need to outrun you” is at least as old as the human race, which, if you read Genesis 1:31 literally, is just six days less than the age of the universe. The implication is that if dinosaurs existed at all, they must have coexisted with humans — though not for long, if that determined-looking velociraptor has anything to say about it.

Wow, Marvin’s callous abuse of his family is even more repulsive viewed through the lens of post-Edwardian British class structures. And you can bet Team Marvin is right now putting the finishing touches on their next miniseries, Slavemaster Marvin: a Tale of the Old South. 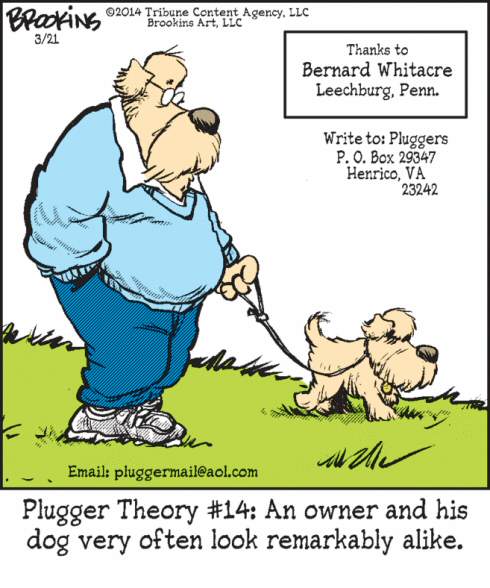 Pluggers are beyond shame, and no longer even try to hide their depravity. Please, if you know the first thirteen Plugger Theories, in the name of everything holy keep them to yourself.

Pluggers put Comics Curmudgeon tote bags over their heads – their only hope of looking stylish! Send your generous contribution today!

P.S. Comments of the Week will appear Monday, when Josh gets back.