So ends the Comics Curmudgeon Spring 2014 Fundraiser! Thanks, generous readers one and all!

Oh hey it’s time for Uncle Lumpy Reads Comics that Even Josh Won’t Read, So Nobody Has To Except for Poor Sad Me, a regular feature. Spunky reporter Lara Bell recruited lowlife adventurer Rick Grubber to take her into the Deep Woods, where they were set upon by the Bandar and brought to the Phantom at his Skull Cave. Phantom gave Lara an interminable tour of his Treasure Rooms, interspersed with braggy vignettes illustrating his complete awesomeness and coy little asides to Guran about how they were going to amnesiate Rick and Lara using Powerful Bandar Medicine®.

So Lara got all “You’re so hot, let us wed!” but the Phantom was like “Nuh uh I’m all married ‘n’ stuff”, and that night Grubber tried to steal stuff but it wasn’t even the right stuff and [WHOOSH!] the bush pilot went back to Bangalla and surrendered to the Jungle Patrol, and the mysterious aeronaut reappeared in his balloon to thank the Phantom for saving his descendants.

I feel much better, somehow. 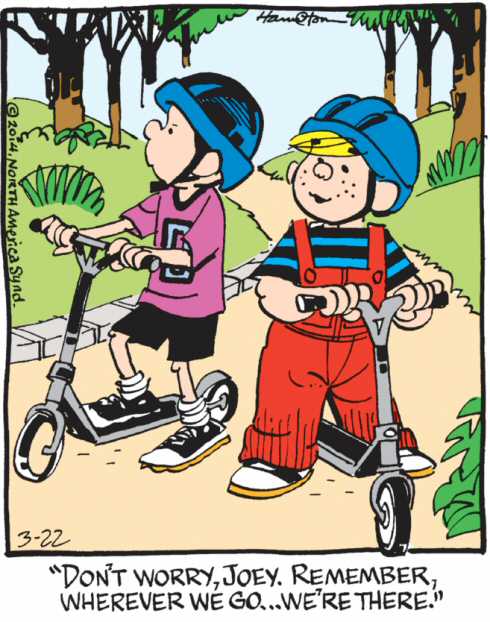 Oh look – wordplay. “I wasn’t making a considerate comment about my father’s condition. I was making a commonplace observation about my own reaction to it. Um, ha ha, see?”

Ooh, we’re in the lair of the Hat Guys, Flico and Flaco. Flico jerked on the stick and spilled his drone upon the ground, so now he and Flaco will have to make contact up close and personal at the party tonight. They’ll probably run into Randy, who will chat them up for hours waiting in vain for his bribe.

If you won’t listen to your own daughter, Rex, your readers would like a word with you.