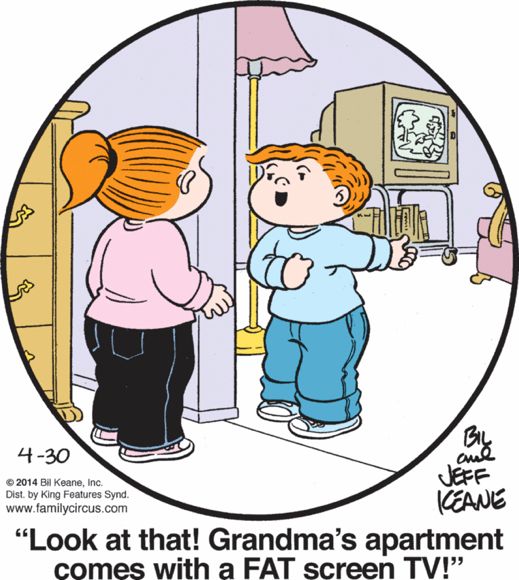 We’ve seen the Keane kids watching anachronistic non-flat-screens before, as is to be expected in a strip that, like many legacies, is usually constructed from a comprehensive library of decades-old clip art. Today’s installment is interestingly post-modern, though, in that the very outdatedness of the art is transformed into a self-referential joke by the rewritten caption. What do you suppose the original joke here was? “Look at all those books grandma has! Is she a Communist?”

Well, that didn’t take long at all! John Darling’s last words weren’t a defiant announcement of his devotion to his secret lover at all, but rather a weirdly phrased declaration of love for his daughter. Turns out he was secretly a good guy, to one (and only one) person, namely his infant child. I guess that solves the mystery that was bothering Jess, somehow! The rest of us can just be relieved for her sake that her father didn’t live long enough to inevitably use her beloved nickname in a cruel and degrading fashion (“Hey, whatever happened to my unrealistically proportioned little Barbie doll? Better lay off the deserts, sweetie!”).

Ooh, look at Wilbur, acting like a big shot, showing off his connections to Santa Royale’s rich and powerful! Meanwhile, in panel two, Jerry is practically going cross-eyed just imagining all the sandwich revenue Wilbur has generated for him over the years. What a wonderful, mutually beneficial relationship this has been!

Marvin thinks his friend’s house smells “strange” because the air isn’t thick with the stench of his own putrefying feces. That’s the entire joke of this comic strip, which is published in newspapers across the country!