Long ago, I worked with a photographer who was also a passionate VW enthusiast, and for whom every new “upgrade” to his beloved brand was a kick in the solar plexus: One-piece rear window, UNGH! Big tail lights, UNGH! Convertible top, UNGH! When they introduced a semiautomatic transmission he uttered a fearsome oath, bought a Porsche, and never looked back. Good thing, too, or he would’ve seen the abomination Niki’s driving.

The same dark forces that turned the bug by degrees into the Super Beetle turned Original Niki and Kelly into these two. We first met Niki snatching June’s purse to buy artisanal salami for his methskank Mom, then doing some impressive ethical acrobatics to talk himself into a big payday “reward” after an extended tutorial from Rex. Kelly started out a stereotypical Bad Girl running off to drug parties in the woods and having a Brush with Death before Seeing the Error of Her Ways. Now they’re all cleaned up, and droning out text like “Sarah’s a great kid and I like her very much” about hideous paint-spattered brat-monsters. Kids, don’t let the Morgans get anywhere near you, is what I’m saying.

Slylock’s totalitarian society descends into outright racism: “First they came for the skunks and I did not speak out, because I was not stinky.” 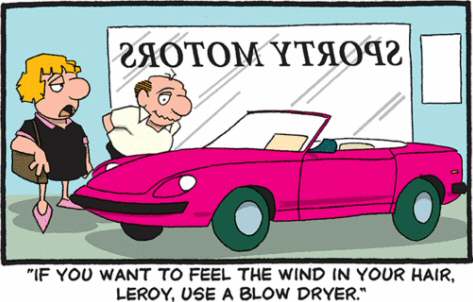 Loretta, lack of wind is not the problem.

Also: Alfas haven’t had those bumpers since 1982. Has Leroy been bald 32 years?

Parson Tuttle’s own sins tend toward small-time grifting, so he’s plum tickled to get a lead on the more entertainin’ sinnin’ goin’ on in th’ Holler.

Now that right there is an authentic automobile. Own it, Ernie — own it as long as you possibly can. Doris will be happy to drive you to work.