Wait, wait, Dagwood, I want to hear more about your line of food-themed children’s books! Like Beauty and the Beef: does a simple peasant girl fall for a handsome prince who’s under a witch’s curse and has been turned into a succulent, mouth-watering plate of roast beef, and the girl must lift the spell before her love for the prince is overwhelmed by her hunger? Or Three Little Pigs In A Blanket: is this how the story should’ve ended, with the Wolf victorious and the pigs devoured, though not before their (still living?) bodies are wrapped in flaky, delicious biscuit dough? And “Wee Willie Twinkie” — clearly an anthropomorphic Twinkie, but a child, younger than Twinkie The Kid, trapped eternally in a prepubescent state like a boy vampire by Hostess Brands LLC’s devilish formula of shelf-stabilizing food preservatives. “Please eat me!” Wee Willie begs the reader. “I cannot decay over time! I’m an abomination against all that is natural and good! I long for death!” Anyway, these sound like they wouldn’t be traumatizing at all and I think Dagwood should spend a lot of time and money trying to get them published. 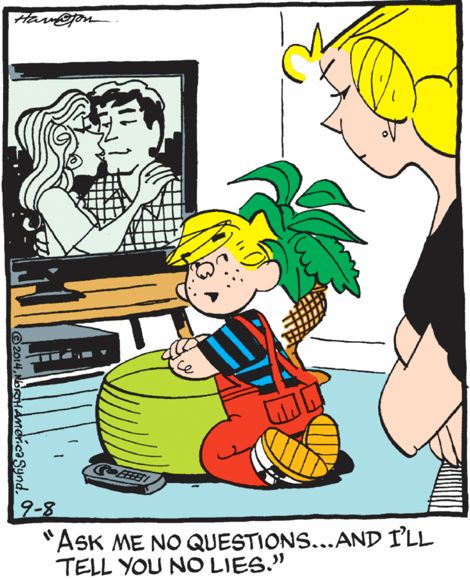 I originally saw the quotes around Dennis’s sentence here and assumed he was repeating something he had just heard on TV, while looking over his shoulder at his mother and presumably showing a creepy lack of affect: vaguely menacing, I thought. But I went back and looked at older panels and nope, it turns out the dialogue for Dennis the Menace is always set out in quotes, meaning that this is something he’s saying to his mom about … the fact the he’s watching people on TV making out, maybe? “Look, Mom, maybe this is several years earlier than you expected me to start looking for ‘Adult Situations’ in the television listings, but let’s establish a policy now of never talking about it, OK?” Menacing level: extreme.

One thing that’s fun about the Funkyverse is when women in stereotypically attractive professions (newscasters, personal trainers) are drawn with heavy-lidded, half-dead eyes. Somebody knows what they like! They like it when you’re so beaten down by life that you can’t feel anything anymore. Anyway, Crankshaft controls the last viable bee colony in his county — and perhaps in the world? — giving him unprecedented power over agricultural production, and, by extension, our very existence. And also Funky doesn’t want to do his exercises! Wacky!