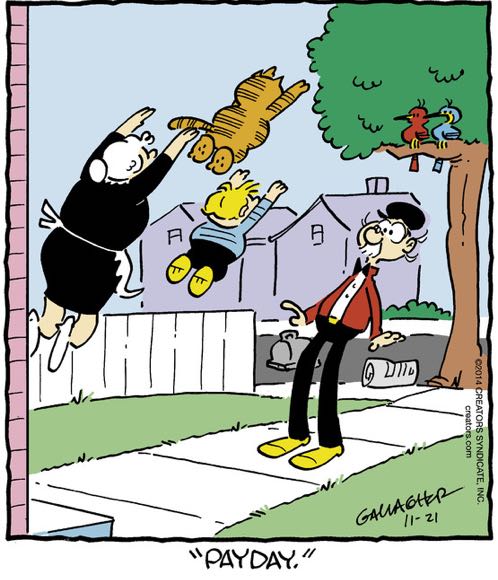 So Heathcliff being depicted as hanging in the mid-air, on the verge of descending onto some hapless soul with claws unsheathed, is a thing in Heathcliff that happens semi-regularly! This is the first time Heathcliff’s owner-grandma and owner-boy have gotten in on the action, though. Ha ha, it’s funny because Heathcliff’s owner-grandpa has money, and his family is going to tear his flesh from his bones in order to get it!

Haha, remember when Bull got offered a job as a college coach and was so rapturously happy that he and his wife threatened to spend the week fucking? Well, instead they spent the week gloating about how much more money he was going to make, but now the job has been cruelly yanked away from him. This is why I think Funky Winkerbean is pretty savvy about its sadness-brand: when you make all your characters intensely unlikable, your readers don’t really mind knowing that only bad things will ever happen to them! 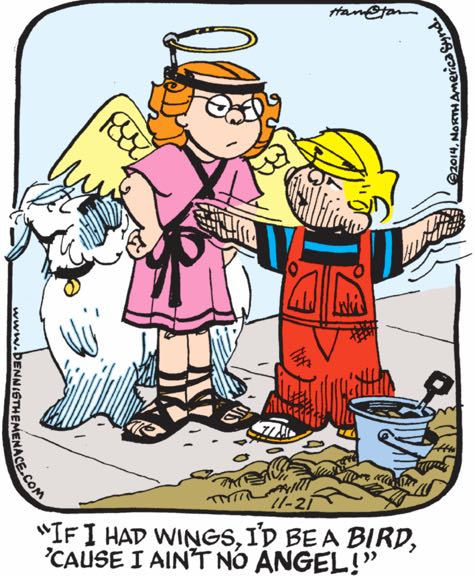 So … we’re not going to talk about the fact that Margaret is just wandering the streets dressed up as an angel? It’s not Christmas pageant season or anything. She’s obviously experiencing some kind of psychotic break, and all Dennis can do is make a joke about being a “bad boy.” I dub this whole scene pretty menacing in its callous neglect of her mental health.