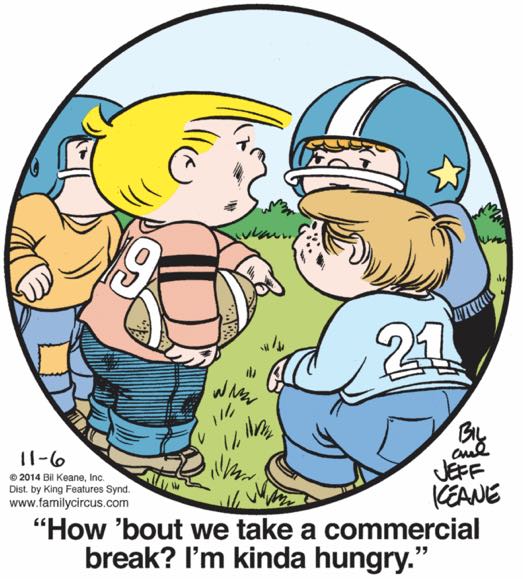 The idea that one is constantly being closely observed and assessed by others is known within psychology circles as the “imaginary audience”. It’s common in children, but if it lingers into adolescence it’s generally considered a variety of diagnosable narcissism. Frankly, I think it’s about time for Billy to grow out of it; instead, his own inborn egotism, fed by a steady diet of for-profit media, has led him to the delusion that not only is his dull life fascinating to the faceless millions watching his every move, but that his antics are somehow amusing enough for someone to actually buy ad time against them.

I mean, sure, if you’re going to predicate your strip on the idea that dogs are sapient to the extent that they talk and hire psychotherapists, why stop there? Why only dogs? Why not the fleas that live on the talking dog’s skin and feast on its blood — why can’t these parasitic creatures also think and reason and talk, their incessant chatter banging around the edges of Grimm’s consciousness? And why stop at the fleas? What about the microbes that live on the fleas? Why shouldn’t all the individual cells making up the fleas and the dogs and the therapists have their own thoughts and feelings and opinions? Why shouldn’t be the world be a baffling, terrifying blur of murmuring consciousness, a quicksand of souls pulling us into whirling chaos?

Ugh, that got a little heavy, didn’t it? Here’s today’s Momma as a palate-cleanser. Ha ha, it’s funny because Momma and her sons are literally the last people in America who don’t have a calling plan with unlimited voice minutes! 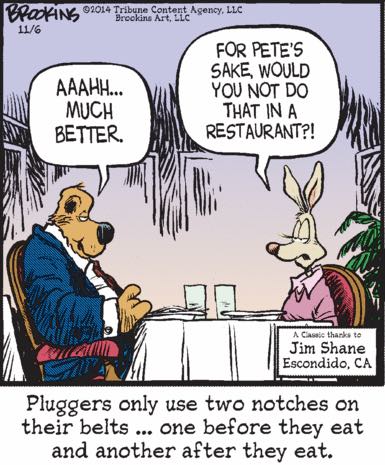 Desperate to maintain readership, Pluggers will now only offer comic panels that can be easily misconstrued as something so horrifying that you have to read the caption to reassure yourself that the world is still a sane place.

This is gasp-worthy news! On the one hand, Margo loves her mother and wants to do right by her; on the other hand, Margo is not very good at planning weddings, just like she’s not very good at all the other glamorous-sounding consulting businesses she’s set up and abandoned over the years. Fortunately, if this week’s strips are any indication, Margo can just arrange to have the wedding inside some dowdy apartment and tell her parents it’s New York’s most fashionable restaurant.