Despite Mary’s professed friendship for Hanna, she and her new beau were conspicuously absent from last week’s Thanksgiving feast. Apparently they spent the holiday at Sean’s assisted living unit, bantering about toast. “It’s the simple details that make all the difference,” Hanna says, pleased that the tasteless, pre-sliced white bread that Sean has pulled out of a plastic bag will be made vaguely edible by the toasting process.

Note that Sean has a top-of-the-line, four-slot toaster. He knows what the ladies like. 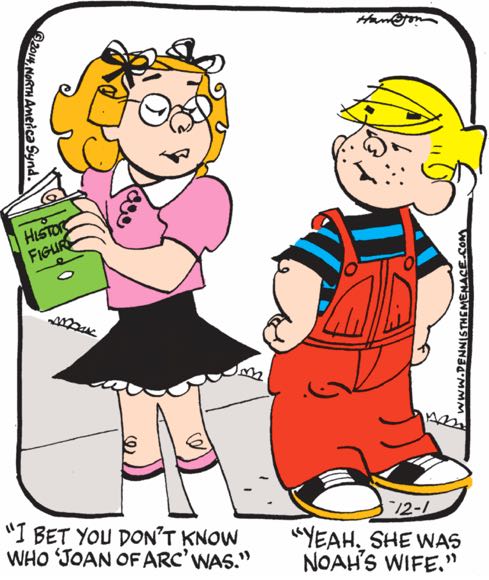 Having written a blog post more or less daily for ten years, I have come to have a certain degree of sympathy for the longrunning comics I mock, and to understand that not every day’s effort can be a winner: some days, you just sort of run with the joke you have and hope for a better tomorrow. And yet I don’t think that justifies pulling out a joke that was already ancient when it appeared in the first Bill and Ted movie 25 years ago, Dennis the Menace. I really, don’t. Do better.

The t-shirt joke in panel three is probably similarly ancient, but I have to admit I kind of love it. I’m willing to overlook the fact that teams from public and Catholic high school rarely play against each other, in my experience, or that it’s rare for a football team to score 11 points. Any sports trash-talk that involves papal regnal names and Roman numerals is entirely acceptable to me.