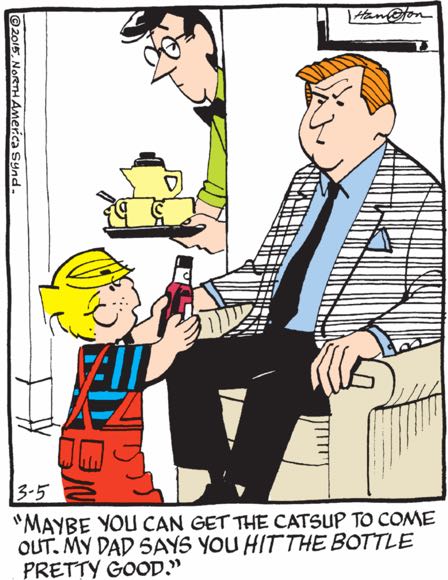 As a Ginger-American, I spend a lot of time wishing for more positive depictions of my people in the media. Sure, we have the Weasely family, but that’s about it. Thus, I was actively angered when I saw that today’s Dennis the Menace indulged in the sad, stereotypical depiction of redheads as angry, sullen drunks. You know what the real menace is, Dennis? Intolerance.

It’s not so much that Hagar doesn’t like tea as he doesn’t respect the property rights of settled agricultural folk who live in castles, Eddie. For now, you’re part of his war-band, and so he considers you a friend and ally. But as soon as you form a marriage-tie to the ruling class of settled, civilized Europe, you become an enemy to any self-respecting Viking who dreams only of bringing plunder back to his family and retainers on the continent’s northern fringes. Inviting Hagar in to your inherited home will mean signing your own death warrant.

We all love the patented Shoe Goggle Eyes Of Horror, of course, but almost as charming are their complement, the patented Shoe Heavy Lids Of Despair. They’re particularly grim to see on the face of ostensible child Skyler, whose youthful love of life has long been crushed under the unshakeable compulsion to answer straightforward questions in school with terrible, unfunny wordplay. “His friends wanted to make sure he got the point,” Skyler says, hating himself. “Eh? Eh? Get it? Because he was stabbed to death?”

I was kind of meh on this storyline for a while, but everything that’s happened after Mysterio was captured has been pure comedy gold. Today, the fiend manages to break free from captivity and … runs six feet to attempt to make a dumb point about Spider-Man’s secret identity! Then he stands around like a jerk while the cop trots over to arrest him again! 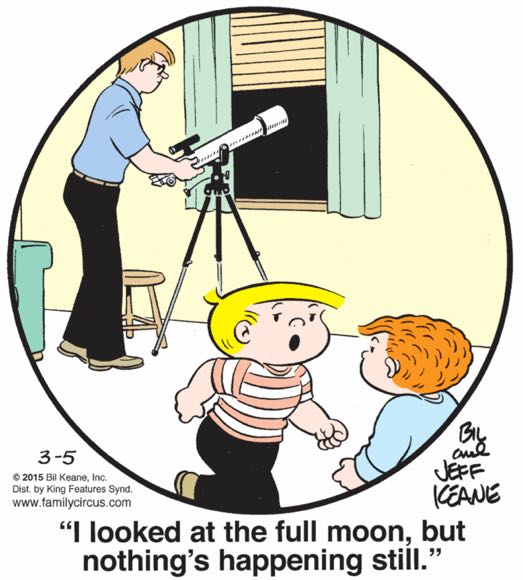 “Yeah, I gazed at the wonder of creation, saw otherworldly sights that have moved the hearts of men for centuries. Turns out the moon’s pretty lame! What’s on TV?”