There was an Apartment 3-G earlier this week where Margo threatened to crush her beloved assistant Sam beneath her boot-heel like the lowly worm that he is, and I didn’t even discuss it here because I figured there was more where that came from! How wrong I was. Somehow between yesterday and today Margo decided Skyler did something wrong and then chewed her out about it and humiliated her but retained enough emotional control over the situation to then forgive her and make it seem magnanimous! What exactly was she mad about? Was it because Skyler was shooting off her mouth about her big news before Margo was able to come up with a Publicity Action Plan? I love that her punishment is that Margo will refuse to even start thinking about publicizing this exciting career development for several more days. I’m sure the studio will feel warmly about all of this! 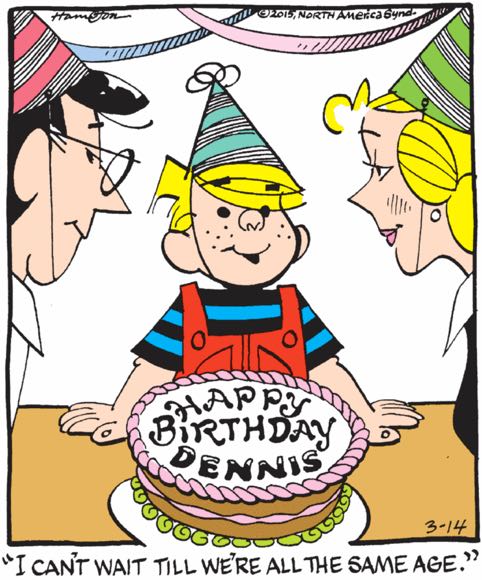 What’s a sadder way to think about this: that Dennis childishly dreams that one day he’ll be an adult and can be a contemporary to his parents when they’re still young and vital, or that Dennis is a comics character, trapped forever in a single moment, doomed to never age to adulthood no matter how much he wants to? Oh, is the saddest thing immediately coming up with two separate and distinct really depressing readings of a Dennis the Menace comic, without trying? Yeah, that’s probably it.

“We’ve been invited to a friend’s house!”

“Oh, have our friend and his girlfriend decided to form a legally recognized pair bond yet?”

[THEY MASH THEIR FACES TOGETHER]

“No, they have not! Our pair bond is still the best! Ha ha! We’re in love, like normal humans!”

[HE TOUCHES HER NOSE EROTICALLY]