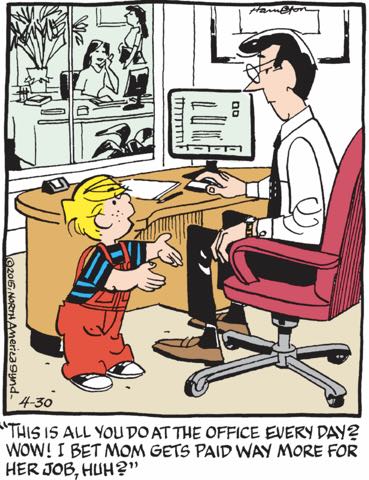 I was going to make some kind of joke along the lines of “the divide between rewarded and unrewarded work under capitalism is still gendered and that’s the TRUE menace” here but then I noticed that Henry doesn’t even have a keyboard for his computer, just a mouse. What does he do for a living, like … click on things? Jesus, I hope he isn’t getting paid much for this.

“How can a box ring a doorbell?” asks Dot, watching the Amazon drone buzz off. “How can we call a company a job creator when it works harder and harder to replace all its employees with robots? What good will my inefficient fleshy body be in the post-human future?” 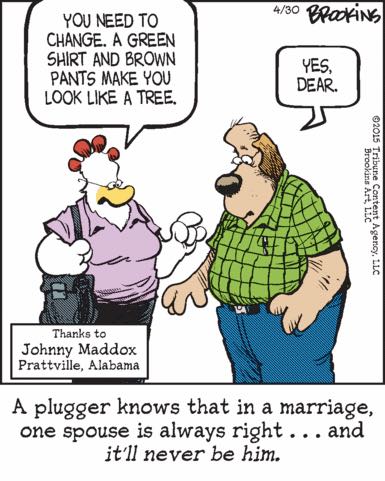 Pluggers know that chickens can perceive a much broader range of colors than dogs can, and divide fashion responsibilities accordingly. Do you think those pants look blue, with your human eyes? The dog knows better. The dog knows chickens see what we can’t.

Look, it’s not like King Features wants to publish a comic where every punchline is about a baby shitting himself, OK? It’s just … it’s Marvin. He can’t be stopped. He can’t help himself. Look, he’s seized control of the comic and is now penning his own “diaper diary.” “Today I had a conflict with my mother,” he writes. “And I got revenge by shitting myself.” Presumably this same joke-form will be repeated daily for years, for decades, while the civilized world begs for some kind of sanity to no avail, until the Earth is a burnt-out cinder.