The sad fate of Apartment 3-G is apparently not quite official enough for Wikipedia, but Mark Trail artist James Allen, prompted by my post, got in touch with King Features and got confirmation that the strip is on its way out. This is obviously really depressing to me, but I’m going to try to keep it together and give the strip the best send-off I can, which is to say I’ll mock it with affection till it’s in the grave. At least we’re finally going to get the resolution to the one storyline that’s nagged at us for years: the will-they-or-won’t-they romance between Margo’s parents, who are presumably going to get married in the hospital chapel while a comatose Margo’s respirator whirrs in the background. “I haven’t been a great husband, Gabby,” says the man who was married to someone else when he knocked Gabby up, then forced that woman to raise Margo as her own, then had her bundled away to a private “psychiatric facility” upstate. Oh, hey, remember how said wife referred to Martin as “my husband” during the plotline where she came back and tried to kill him? What if they never formally got divorced? What if this turns into a real Jane Eyre-type situation, with “upstate” just a code for “this hospital where Margo is now, which is probably north of the park or something?” That would be an amazing send-off, honestly, if a crazed Bobbie Merrill were to burn the place down in a fit of madness and kill every last character.

General Halftrack’s expression of genuine despair, as he pleads with his clergyman to explain why he feels so spiritually adrift, why he’s unable to feel the presence of his Creator, is so vivid and poignant that I felt actively angry about Chaplain Stainglass’s flippant answer. I consoled myself by imagining that he was in fact being very literal. “Ah, yes, it’s possible that you’ve been calling … the wrong number … if you get my drift” [winks] [passes General Halftrack a piece of paper with “WORSHIP LORD MOLOCH” written on it] 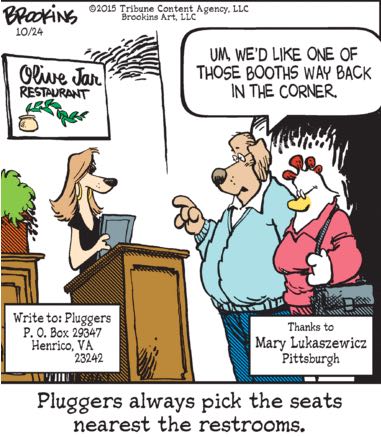 Look, guys, pluggers just have to go to the bathroom a lot, OK? They don’t enjoy getting occasional whiffs of urine or feces while they’re dining. That’s just a rumor, just a disgusting rumor, and they’re tired of you spreading it around.