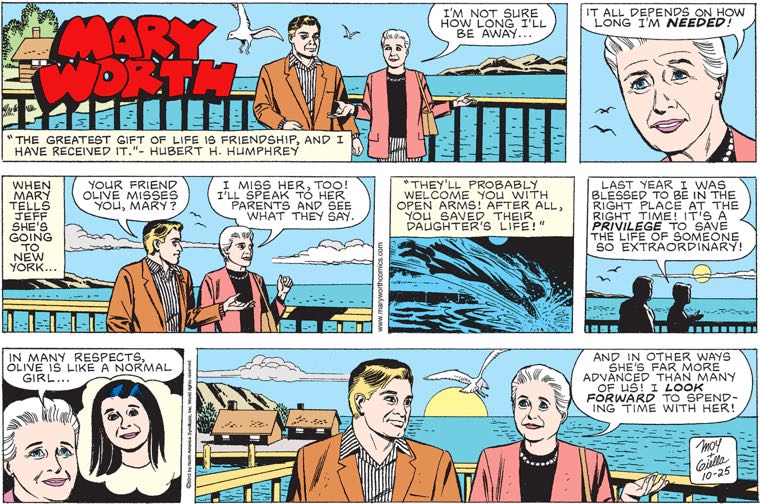 I was going to make a joke about how Mary is planning on journeying to New York to pledge her fealty to Olive, our new hyper-evolved Goddess-Queen who will one day enslave humanity with her mind powers, but I can’t get past today’s Inspirational Sunday Quote, from former Vice President Hubert H. Humphrey, who lost the bitterly contested 1968 presidential election and then apparently went on to claim that, really, nothing in life is better than friendship. He didn’t want to be president anyway. Nixon was fine, and he’s not even mad about losing, since he’s got good pals. Yep, friendship, that’s what really counts.

I was going to make some joke about how Kids Today can’t conceive of a Halloween celebration without the omnipresent branded characters that have crowded all imagination out of their fantasy world, but then I saw panel one and got a load of Ma Keane’s costume: she’s going as some kind of horrifying pinheaded circus freak.

I was going to make a joke about how today’s Beetle Bailey throwaway panels are pretty clearly about how Miss Buxley wants Beetle to have some energy tonight, for sex, but then I got a look at this strip’s attempt to depict ears from behind and ew ew ew ew ewwwwwwww