I haven’t really tried, but I imagine that it’s nearly impossible to make a pancake that actually looks like anything other than a collection of circles, so I guess if we’re being realistic it’s impressive that Cookie has managed to create pancakes that look even vaguely like Sarge. However, considering that this is the fantasy world of the comics, where imagination and tiny printing sizes in newspapers are the only constraints, for this strip to work I think they should’ve looked … more obviously like Sarge? I think a lot of people are just going to read this as Cookie offering the soldiers slightly malformed pancakes, grinning broadly, and saying “Chew them good!”, which they might find off-putting. I find it off-putting and I know what the joke is supposed to be.

Right, right, so, Thor is the brown-haired one! Pretty bittersweet that I’m finally learning to tell these characters apart as they’re killed off one by one. 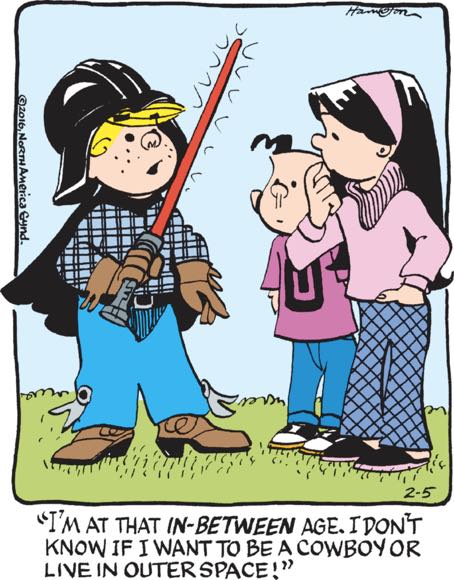 “I don’t know if I want to engage in constant low-level violence on a lawless frontier that encroaches on the land of indigenous peoples, or serve as the right-hand man to a genocidal dictator!”

“My God, not the scrapbook! Pilot, shake loose the ranger and the boy, fly directly down into the inferno, and kill that bear as hard as you need to — the scrapbook must be rescued unharmed!”

ANOTHER VICTORY WON BY THE AMAZING SPIDER-MAN