A subplot of the Derek-Sophie storyline that I haven’t been dwelling on because I’ve been super not into it has been “Oh no! Derek wants to do sex stuff!” I’m actually pretty glad that today’s strip acknowledges that, you know, teenage girls also have sexual desires! I’m also glad to see that despite her transformation from a bullied nerd into a popular cheerleader with a hot boyfriend, Sophie is still the family intellectual, unleashing her brilliant “You know, this roadie business is the only thing preventing me and Derek fucking non-stop” strategy that will keep her parents befuddled.

Speaking of young love, Amazonian rugby-star-turned-basketball-goon Kenzie Hanley and former placebo abuser Max Bacon are totally an item now, everybody! Mainly I’m posting this to point out that exaggerated mid-conversation “time out” gestures are exactly what I’d expect from the amiable athlete-dorks of Milford.

This is kind of delightful on its own, but if you want an explanation, it’s a follow up to this strip; apparently Max intended to send his mom a pic of himself in the tub as an E-Valentine (ew?), and got mixed up. Anyway, I want to point out that the fact that he’s inexplicably clean-shaven in panel one, combined with his pinched facial expression in panel two, makes it look like he’s pooping a little beard out of his chin. 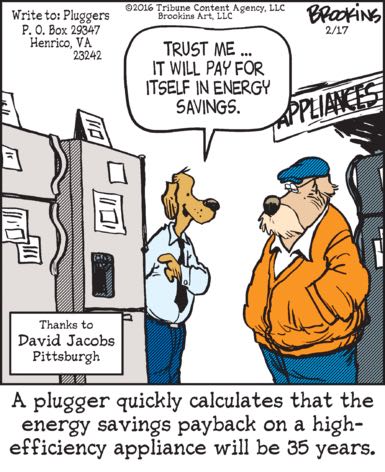 Pluggers know that, the way they eat, they’re gonna be dead in five years, ten tops, so who really gives a shit, you know?