It’s the Comics Curmudgeon spring fund drive! You can bet we pay close attention to generous readers like you!

Do you ever get the impression comic strip creators aren’t always meticulous about consistency and continuity? I do! Let’s see why:

Remember how elated Jeff was about neighbor Lillian naming her bookstore on Sunday? Well, turns out that was just a short while after his mother Rose suffered an episode of syncope that even today has him moping around the home where he spent his miserable childhood. He takes a break from self-pity to enjoy himself on weekends? Lack of commitment — sad! 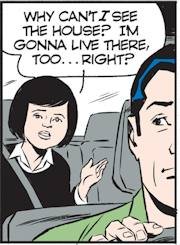 Hey, it’s adorable gifted artist Sarah Morgan and half of her Dad! 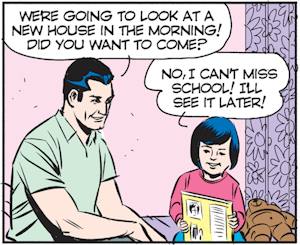 And here she is last Saturday — last night in strip time. Does she want to see the damn house or not? Is the strip’s author confused? Is Sarah? Knowing the character, these flip-flops are probably part of whatever con she’s running.

Hey, it’s beloved secondary character Wilbur Weston, Dawn’s Dad! Check out his uniquely neglectful parenting style: “Dawn, is this older man you’re spending all your time with trying to use his influence and position of authority to take advantage of you in some way? No? Okay, welp, grub’s getting cold GLOM GLORP SMACK.”

Always four hairs, all across the years — somebody’s showing commitment to the project! The intern who draws Crankshaft’s blackheads could take a lesson.

But for a truly neglectful relationship, consider the one between Josh and Luann: he has sworn a terrible oath to ignore the strip entirely, so these periodic updates fall to me. Hey, it’s the job.

Leslie (“It’s Les!”) Knox is a bully because he ignored Knute’s order not to enter a men’s bathroom Crystal was using, moments after Knute himself left it, and despite the fact that guys hanging out while girls pee is totally a thing here. Anyway, Knute attempted to choke Les as he walked in, but Les knocked him down, presumably did his business, and left. Got that? Les is the bully.

In an amazing feat of circumstance, he is also the nephew of Mr. Gray, who is both the taciturn and possibly mobbed-up former Las Vegas club manager who saved Luann’s parents’ nightclub and the lethargic swain of Gunther’s Mom. Small world. So Gray is calling in a favor from Luann’s parents by having them hire Les to work at the in-club restaurant TJ manages.

TJ is probably just checking his calendar there to show us that Les is compounding his bullyhood with tardiness. But I prefer to think the gang took Les to the vet to have him chipped, and that TJ is checking his BullyTrax® app.