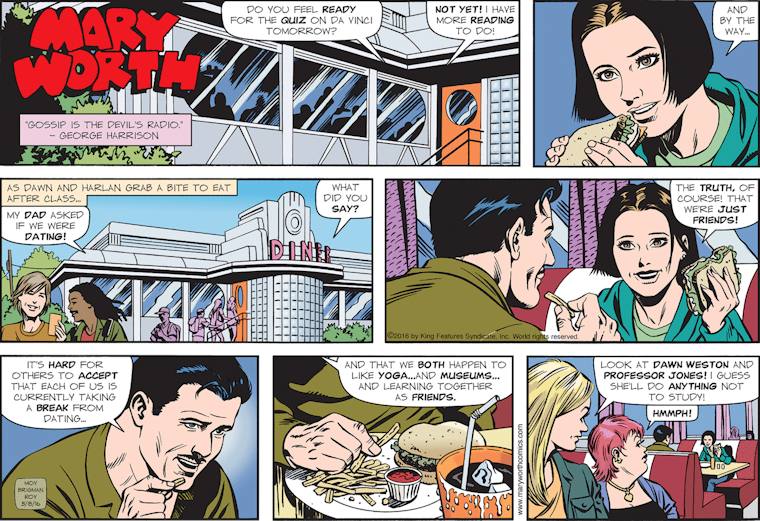 You know that movie moment when the hero/heroine makes some everyday gesture like taking off his/her glasses and the heroine/hero sees for the first time how attractive he/she really is? And thereafter their romantic entanglement is just a matter of time, typically seconds? Well that just happened for Harlan and Dawn in Mary Worth, and suddenly their whole world looks different and exciting! But don’t worry, you crazy lovestruck kids – gossip will still be gossip even after you systematically validate every accusation those haters make. So that George Harrison quote up there will still apply. Priorities!

New Wilbur waits for his entrance just offstage — four hairs askew; eyes locked on that beautiful, impossible sandwich; standing in a puddle of his own drool. 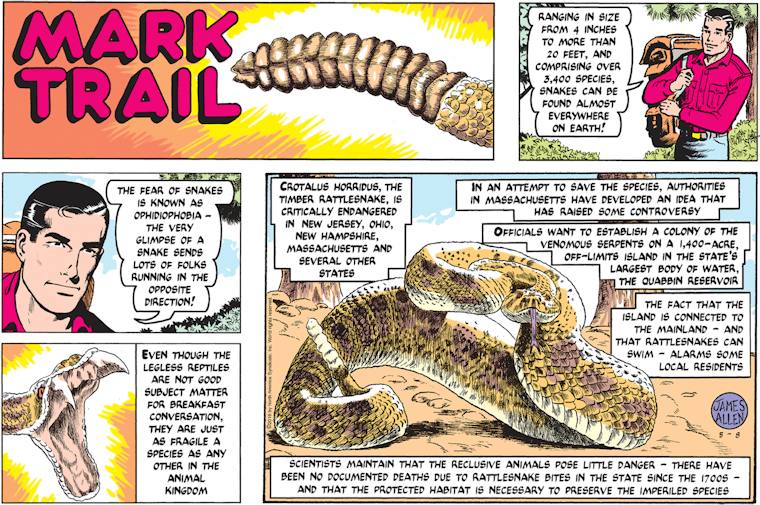 Of course for compelling Sunday comics art, one seldom needs to look further than Mark Trail. But the strip takes a chilling turn when it promotes giving a “colony” of timber rattlesnakes (Crotalus horridus, for Pete’s sake) their own private Eden smack in the middle of densely populated Massachusetts.

“What’sssss the problem?”, whispers a tiny voice. “Those deathsssss were never documented, and everyone knows the peninsssssula … I mean the isssssland … is strictly ‘off-limitsssss.’ I mean we can read sssssigns, even if we can’t ssssswim.”

Mark, the serpent is a liar. Maybe you read that in a book once, long ago?

Oh look, it’s Rocky, strolling in all relaxed and blissfully unaware of the histrionic and utterly pointless “where’s Rocky” subplot that’s been going on since last August. Hi, Rocky!

Haha once again, Josh has handed me the keys to the Comics Curmudgeon for a few days only to see something amazing happen in Mary Worth on my watch. It’s like my superpower, or maybe his. Back in 2010 it was a shootout at the Santa RoyMart warehouse; this time, it’s a major change in the Sunday strip’s artistic direction.

The new artists are the husband-and-wife team of June Brigman and Roy Richardson. Comic book fans will know Brigman’s work on Supergirl and as a founder of Marvel’s Power Pack; Richardson’s inking for Captain America, Iron Man, and The Flash; and their collaboration on the Star Wars: River of Chaos series of graphic novels. But I got to know their work from Brenda Starr, for which I was an unabashed fanboy. I am going to like the hell out of this, and I hope you do, too.

Outgoing (but not retiring – he’ll still do the dailies) artist Joe Giella, like Brigman and Richardson, is a comic-book veteran – check out his Wikipedia page for the portrait of a proud old-school Industrial Artist whose contributions helped define every comic-book “age” from Golden to right now. This interview is worth a read, too. He also has a great sense of humor, as revealed by this 2008 drawing that our usually lowercase Josh rightly called THE GREATEST MARY WORTH-RELATED THING YOU HAVE EVER SEEN.

And with that, faithful readers, I’m off the clock. Thank you for a great week, and for being so generous during the fundraiser. Josh returns Monday morning, with steaming hot cauldrons of that Joshy goodness we all know and love. Until next time!