Hello, faithful readers! I am back in the saddle and better than ever. I had a wonderful if extremely exhausting time on my book tour. Attendance really blew right past my expectations, and I might try to do some west coast dates later this year, so watch this space. I got to meet many of you, including a young man in Buffalo who asked me to autograph a printed out joke from my blog where I made fun of Archie! I was very, very thrilled to do this. 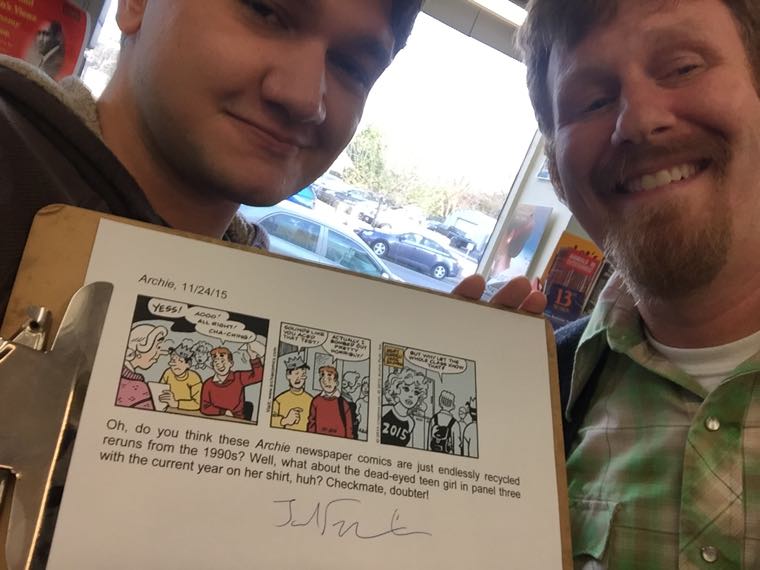 Anyway! Huge thanks to everyone who contributed during the fundraiser — you’ll be getting personalized thank yous soon, along with queries for info on where to send your tote bag, if you want one. And huge thanks to the unflappable Uncle Lumpy, who got to experience the most shocking moment in recent Mary Worth history, and who was hilarious all week. As Uncle Lumpy noted, though, Mary Worth’s new artistic regime is only working on Sunday strips for now, so in today’s strip, the world is back in the configuration that we all know and understand.

I love how Cathy has managed to get all the way up to touching distance in the middle of this vast expanse of concrete and Dawn is only now noticing her. Presumably her mind is far, far away, thinking about Harlan bending over in his short yoga shorts and how she is definitely 100% only friends with him, the sort of friendship that’s so all-consuming that you don’t have time for non-Harlan friends, because what use are non-Harlan friends, really?

In other soap strip personnel news, as promised Rex Morgan, M.D., artist Terry Beatty is now Rex Morgan, M.D., artist and writer Terry Beatty. And the first thing happening under the new regime is that Rex and June are definitely not buying this fusty old money pit, which is great news for lovelorn pinheads. I love Rex’s genuinely thoughtful face in panel three. “No three-prong plugs? But … how will I power the laptop I use to ignore you?”

Haha, looks like Rose, the character introduced to make sure that Ed Crankshaft wasn’t the least likable person in the comic strip named after him, is about to die! It’s zany punchlines like this one that really make Crankshaft the “fun” Funkyverse strip. 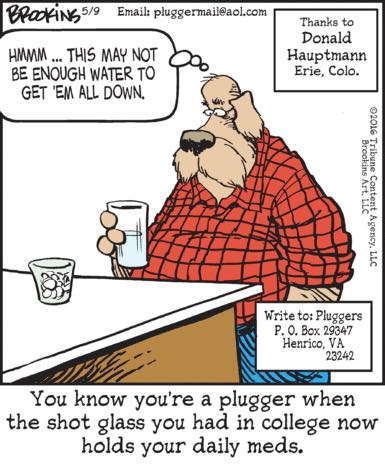 You know, I’m pretty mean to the pluggers in Pluggers, but if you’re not overwhelmed by terrible empathy looking at this man-dog’s sad facial expression as he contemplates the amount of water he needs to choke down all the pills keeping him alive, you’re some kind of monster.