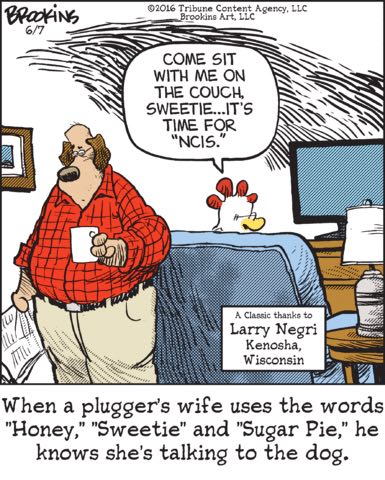 Here’s a fact that I never get tired of: NCIS, a show whose pitch can be summarized as “what if there were crime … in the navy”, is one of the most popular shows in the country, averaging 20.5 million weekly viewers this past season. That puts it just barely behind Big Bang Theory in total viewership; its two spinoffs are both in the top 20. Yet literally nobody in the TV criticism world cares about it! Think of all the rhapsodic analysis of Mad Men we had to endure over the years. Mad Men had 2.6 million viewers a week in its highest-rated season. If an NCIS episode got ratings four times higher than that, think of all the people who would be fired, immediately!

Anyway, these numbers reveal that NCIS doesn’t actually do that well in the coveted 18-49-year-old demographic, which means that, as today’s panel confirms, its audience probably consists of mostly pluggers. Today’s Pluggers actually successfully surprised me with its punchline, but I still like the one I thought up before I read the real one: “Watching NCIS is plugger foreplay.” It would explain a lot!

Time jump shenanigans continue! Look: it’s pre-jump Les Moore, hawking his book about the murdered John Darling, who was the father of his (future, at this point) stepdaughter-in-law! We know, from having secret future post-time-jump knowledge, that this book was a complete flop, which may explain why he’s doing a book signing at a used book store a lady started in her attic, probably without the proper permits.

Oh, man, I forgot to properly highlight the fact that Judge Parker artist Mike Manley has now taken over The Phantom! He’s showing his adaptability here: the Judge Parker gig has given him a chance to demonstrate that he can draw wealthy, beautiful, chesty women, but The Phantom is and always will be all about the beefcake.

Speaking of Judge Parker, it’s good to see the strip fully committing to its shtick of incredibly wealthy people sitting around their palatial compound complaining about how difficult it is to be judged for their incredible wealth.

GUYS YOU BROUGHT YOUR FRIEND TO A RESTAURANT WHERE CHICKENS ARE KILLED AND EATEN, I DON’T THINK SHE’S THE ONE WHO MADE THE MISTAKE HERE