Don’t forget: I’m selling slightly damaged hardcover copies of my novel, the Enthusiast, for the shockingly low price of $9! Click here for all the details, or just click the button below to buy. UPDATE: Holy cow, against all expectations, I sold out of these! Thanks so much, guys — books will ship out later this week. If you’re looking to buy non-damaged, non-discounted versions, try here or here, or, if you love the Amazonian behemoth, here.

I’m really not sure how to even begin grappling with this strip, in which Dagwood, a man who I’ve always assumed to be not too deep into middle age and in possession of a perfectly healthy set of teeth, sits through a nightmarish sales pitch for some kind of futuristic dental implant technology with a name out of a satirical dystopian sci-fi movie. Maybe his insatiable appetite is leading him into the dangerous world of body modification; once this dentist outfits him with ultra-efficient chewing tech, he’s going to show up at a hospital and demand that he be given gastric bypass surgery “only in reverse.”

Say what you will about today’s Beetle Bailey, but it does get to an essential truth at the heart of the strip, namely that all the characters are morons who also have access to military weaponry. I think it’s a nice touch that the joke focuses on Zero possibly blowing his own face off and just barely draws our attention to the box of live grenades propped awkwardly on the table, ready to tumble out at the most hilarious/violent moment. 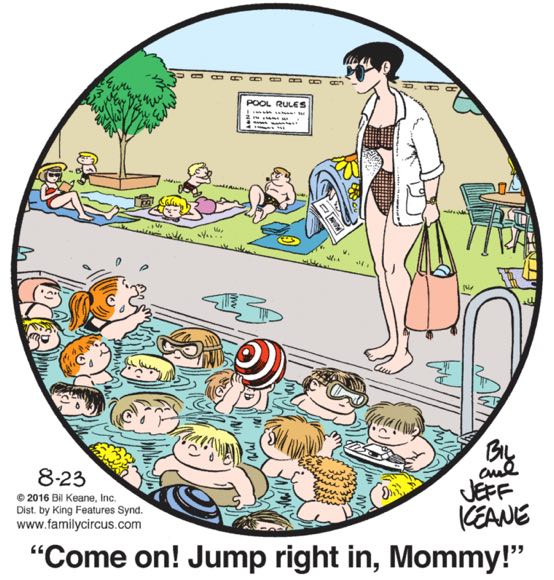 What character do you most identify with in today’s Family Circus? I’d like to think I’m the guy who’s just out there casually smoking a pipe while he’s sunbathing, but I’m probably more like the kid who thinks that because he’s wearing goggles we can’t tell how eagerly he’s staring at the other kid’s toy boat.

So, uh, the staff of Woods and Wildlife Magazine didn’t know invasive species were bad until, like, last year? I’m beginning to have some doubts about their environmentalist bona fides.