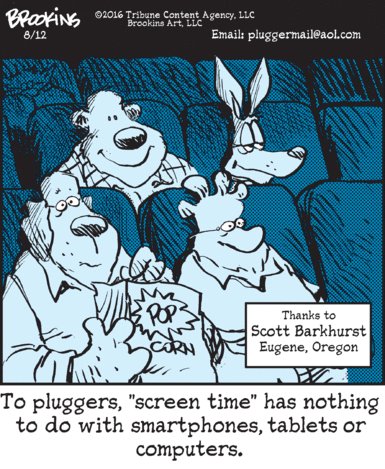 You know, I had assumed that the Bear-Roos and the Houndstooth-Beaks, pluggers all, would just naturally know one another and sit in the same row at the movies — to chat, take too many bathroom breaks, let their phones ring over to voicemail, chew their food with their mouths open, and generally annoy the hell out of me. But in an archive dive of the last three years, I can’t find a single panel that shows Andy and/or Henrietta with Earl and/or Shiela. That’s some pretty admirable consistency, Mr. Chief Plugger! But now my discredited assumption makes me feel like one of those people who says “But you must know him – you’re in the same Army.” You know the people I mean: pluggers.

There’s no way she’s not trolling him right now: “Does he show up uninvited at picnics? Can he sit quietly without fidgeting? Does he work in venture capital? Have Mommy Issues?”

Killer’s appetite for sexual risk only grew until the day they found him in the woods, naked and blue, with a taut chain from his neck to the axle of a stalled Jeep.

“Hmm, there’s a rift between Barry Bader and the rest of the team. Can I get True to take care of it for me? Nope. Can I fob it off on Kaz? Nope. Oh, well — guess I just gotta make the kid figure it out himself. Hope Mimi put that wine in the fridge — this is shaping up to be one tough day!”

There’s a reason his cup says “GIL” and his nameplate says “THORP.” The word “COACH” belongs nowhere near this guy.

Just a reminder that there’s no Comments of the Week this week — BigTed’s contribution gets an extended ride!