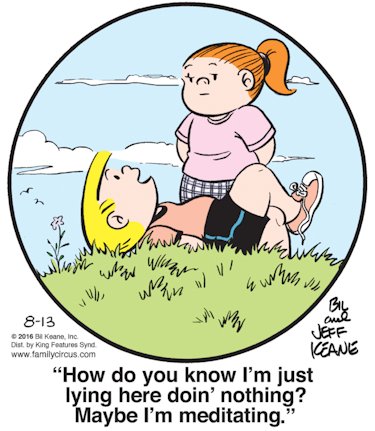 “Am I practicing flat-out nihilism, or some godless esoteric discipline — ha ha I’m agnostic on the question! Oh, I learned so much at Heresy Camp, Dolly, you have no idea ….”

Oh man, that’s some sub-Mary Worth-level advice Abbey is pitching right there, but in fairness, why would she engage seriously the efforts to “find and hold onto a man” of somebody whose 10-year romantic history reads like this:

So maybe the reason you can’t hold onto men, Neddy, is that you keep dumping them? Just spitballin’ here.

Mr. Walker (for Ghost Who Walks don’tcha know) drops his son off at school. I hope this branches the story into three: Heloise and sometimes Diana in New York, mother/daughter bonding and daughter/roomie hijinking under the sinister eye of Eric Sahara (the Nomad!); Kit Jr. learning Phantomry from the monks; and Kit Sr. and sometimes Diana going through the trials of empty-cave syndrome.

But I wouldn’t get too sure about that “You’re a Phantom” thing quite yet – the strip has been dropping hints for a long time:

Since Heloise routinely bests young Kit in athletic contests, maybe some kind of sibling duel-to-the-death scenario is in the offing? I’ll pop some corn.