Ooh, we’ve arrived at the pivotal moment in any Judge Parker storyline: when a large sum of money appears! Usually the large sum of money resolves all the conflicts, but in this case, unusually, it’s the cause of more drama. Why won’t Hank give up his offer of a solid job in a field he loves for the vague promise of partnership Neddy’s crackpot elder-sweatshop scheme? Actually, Hank is almost certainly right to get out while the getting’s good: longtime strip writer Woody Wilson, having handed over the reigns of Rex Morgan, M.D., to Terry Beatty a few months ago, is now getting completely out of the soap opera game, so the endless gravy train might be grinding to a halt! In all seriousness, I obviously have great affection for the work Wilson’s done with both strips and they were a big part of why I started this blog, so I want to thank him and wish him a happy retirement.

Meanwhile, the new Judge Parker writer will be … Sally Forth writer and friend-of-the-blog Ces Marciuliano! This is a secret I’ve known for a few weeks and have been eagerly waiting for you all to find out! Ces’s strips start August 22nd, and I’m excited to see them, and to see how much free money gets handed out in the meantime.

Ha, yes, it’s Marvin talking about pooping, but when it comes right down to it, isn’t this really all of our lives, stripped down to their essence? Makes you think, doesn’t it? It’s no surprise that the colorist changed Marvin’s hair from orange to deep red in that last panel; after all, you don’t expect the protagonist of this strip to be that self-reflective, so they probably assumed it was a different baby.

The best thing about this strip is how completely devastated the buffet employee in the background looks. “But … we allow ‘all you can eat’ based on certain realistic assumptions about the human appetite! The whole economics of this business relies on nobody doing what he just did! We’ll be ruined! Ruined!” 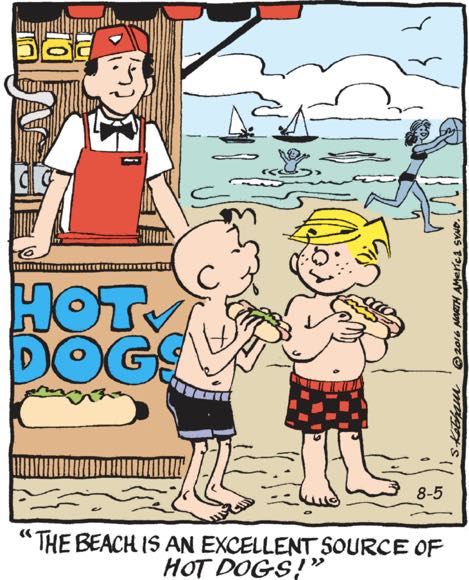 Meanwhile, at the other end of the Food Service Worker Emotional Spectrum, that guy overhearing Dennis extolling the virtues of eating processed meat tubes at the beach looks like he just saw his daughter take her first steps. Dial it back, dude.