Let’s be real, guys: the “relative strength of a spider” aspect of Spider-Man’s origin story has always been kinda dopey, right? I mean, there’s a whole bunch of inverse-square-law problems with this, which equally apply to Ant-Man, who was launched by Marvel Comics in 1962, just like Spider-Man. I guess it was a banner year for bug-men in the comics? Bug-men with bug-strength? Anyhoo, it’s nice to imagine that these costumed morons themselves have only the vaguest understanding of what their abilities really entail and how they work, so it’s very exciting to me to see Spider-Man declare that he can defeat a spider with his spider-strength, only for him to be immediately pinned by its monstrous spider-jaws (the relative jaws of a spider) and then killed by the actual spider’s deadly spider-venom (the relative venom of a spider, which you think would come in handy for a superhero, but no, just keep working that “strength” angle, guys).

One of the more unsettling visual tropes that has been fully absorbed into the collective comics unconsciousness is “trees and fire hydrants are the equivalent of bathrooms to talking comic-strip dogs!” I feel like people love to play with the implications of this joke but lose touch with its origins which lie in the fact that dogs like to pee on said objects. This, I think, is the case here: probably the tire swing is just supposed to represent “what would a really tricked out tree look like,” but now I can’t stop thinking about how dogs maybe like to pee on tires? Or, like, through the hole in the middle of tires? Because they like the challenge, or something? 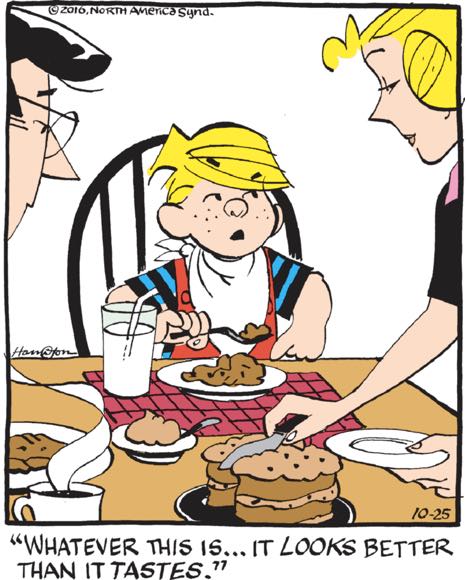 A year after the Great Agricultural Collapse, Alice and Henry are still gamely pushing forward, sculpting their daily ration of Nutrient Slurry into a cake-shaped pile in an attempt to remember what it used to be like in the Time of Plenty. Dennis is having none of it. Dennis’s refusal to keep a stiff upper lip in the endless dystopia is a genuine menace to humanity’s ability to cope.