Happy early Halloween from Six Chix, everybody! I note that these pumpkin-people’s heads and arms are the same bright orange color, which I take to indicate that they are similar in substance and consistency. What prospect do you find spoooookier?

Your answer may hinge on how you believe the pumpkin-beings’ faces manifest. Do they merely appear when one of them finally determines the emotion they want to express? Or must they be carved, with a knife?

Ha ha, angry rage maniac Bull Bushka’s brain is so battered that his angry rage mania is now an integral part of his personality, says his wife, who has to share a house with him and his irrational violent outbursts all the time now that he’s retired! This isn’t setting up teeth-grindingly awful and tragic storyline for the future, at all! 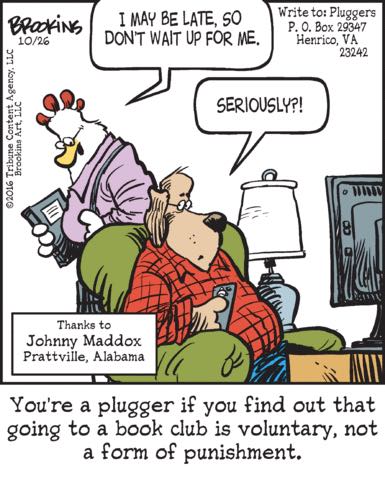 You’re a plugger if you don’t just hate reading but try to shame your spouse for liking it.