Hello everybody! I’m back, and want to say a huge thank you to Uncle Lumpy for pinch hitting and running the fundraiser, and to everyone who participated in said fundraiser, and to those who took the plunge on the Patreon, the latter of which will have some Interesting Benefits in coming months! I will be sending out a questionnaire this week to everyone who qualified for a tote bag finding out if you want said tote bag and if so where I should send it, so if you think you should’ve gotten one of those but don’t by the end of the week, please email me to let me know!

Meanwhile, I’ve crawled out of the smoldering crater where I spent the last week and am ready to bring you more comics joy!

If by “joy” you mean “dramatic older-lady-reading-the-newspaper-in-her-tastefully-appointed-condo-unit action,” which I certainly do, as I hope it’s obvious by now! Anyway, Tommy’s drug problems seem to have been solved by oppressive mothering and our Lord and Savior Jesus Christ, so now we’re beginning an exciting new story! Has Wilbur returned from his trip to harass the Japanese without informing Mary? How dare he? The upcoming pool party is going to be extremely icy.

Welp, as predicted, Bull has been diagnosed with concussion-induced chronic traumatic encephalopathy. This prompted his abrupt retirement, which is ostensibly to enjoy spending some time with his remaining cognitive abilities, but also has the benefit of protecting his student-athletes from his intermittent rage attacks. Do you think the kids on the team have been told why their coach is leaving mid-season, or are they being kept in the dark so that they don’t all quit football forever en masse when confronted with visceral evidence of what it can do to the human brain? 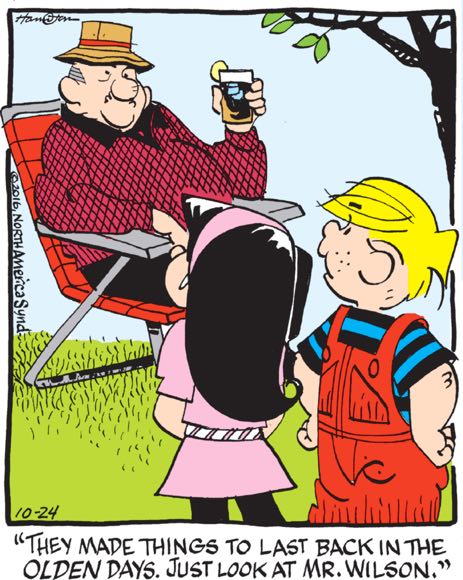 “His skin, so lifelike — his pose, so natural. Nobody would ever guess that he was taxidermied over a decade ago and placed in his favorite chair to terrify neighborhood children! I tell ya, Gina, this sort of craftsmanship is a dying art. I guarantee you we won’t look this good when it’s our time.”