The Singularity is a sci-fi idea that’s bled over into futurist circles (or maybe vice-versa, I can’t remember). Basically, it’s a prediction based on the increasing rate of technological change: someone who lived in, say 100,000 BC would feel right at home in 10,000 BC, and even someone from 200 AD would be able to understand the world of 1200 AD pretty easily. But around the time of the industrial revolution, new technologies started emerging and changing society fast enough that we could see their impacts within a human lifetime, and the rate of change is increasing in disorienting ways. The Singularity is the moment when the graph spikes to infinity, when tech changes so quickly that it’s impossible for us today to understand what our society on the other side of it would look like. Maybe our minds will transcend our physical existence, or maybe we’ll be wiped out by the superintelligent machines we create. A lot of critics have poked holes in the theory, calling it “the rapture of the nerds,” and I tend to agree with them, but you can really see the underlying mechanism at work in this strip. You can tell that the idea is “it’s fun to have children tell jokes about new-fangled technology,” and the writer thinks mass emails are a new-fangled technology. Simple, right? Just nobody tell him that no eight-year-old has ever used email in their life. They’re all on … YikYak now? Is that right? Kids love YikYak? 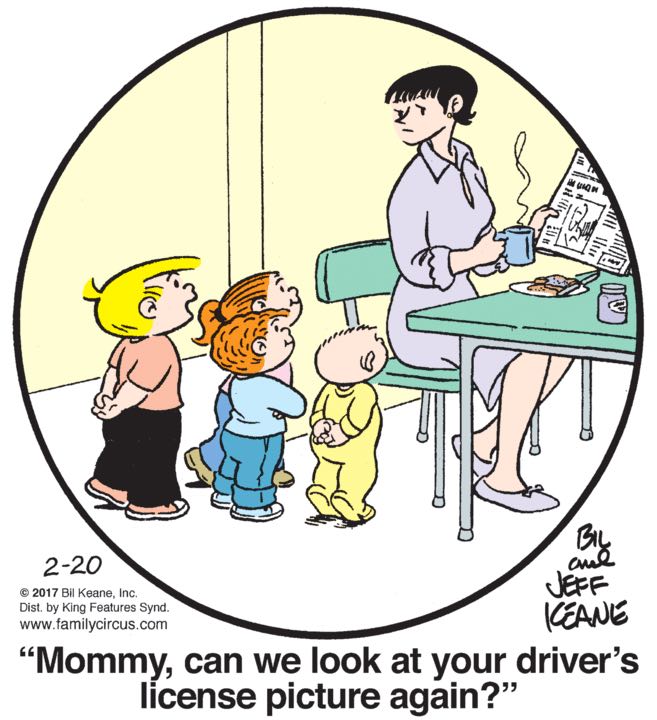 I guess the joke here is that … sometimes driver’s license photos are out of date? Like, probably Thel’s was taken before any of her kids were born? And they think that’s funny? Honestly the real lesson here is that these poor children, cloistered behind the barbed-wire-topped walls of the Keane Kompound, are desperately starved for any form of entertainment.

Last week as Dick and the Spirit got ready to head into battle, our masked guest star demurred when Dick offered him a gun. Bad choice, Spirit! You’re over there spending all this energy wresting a bad guy to the ground while Dick just up and shot the Brush in the face!

Ha ha, it’s funny because Marvin is smug about sitting out in the snow with a diaper full of frozen urine! Jokes on you, kid: notice how we don’t see your parents anywhere? That’s because they’ve left you out there in the cold, to die!