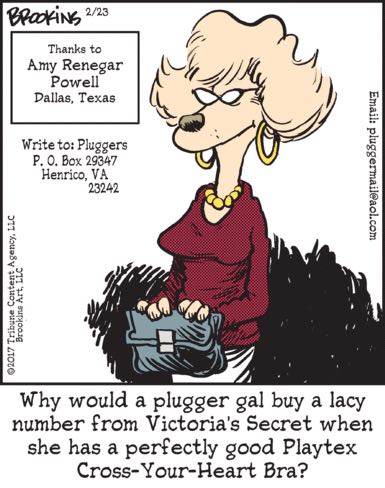 I’ve been doing this job (if making fun of Pluggers is a job, and I would argue that it is, and an important one at that) for more than a decade, which is enough time to see broad swaths of the culture change. Still, with a comic like Pluggers, which is focused largely on down-home country folks who suspect that maybe things used to be better than they are today, you expect a certain amount of small-c conservatism. You expect stability. You expect that it’ll be more or less the same, in almost a comforting way. You don’t expect it to be about tits, and you don’t expect the joke to basically be a slightly updated version of this classic Playtex ad from 1982. You don’t expect that you’ll spend time staring at a Pluggers panel thinking “Did the artist pick entry this because he was excited to draw a ‘plugger gal’ exemplifying the ‘lift and separate’ catchphrase, or did he run out of usable suggestions and decide, ‘Welp, it’s come to this’”? You don’t expect a lot of things in this life, but if you live long enough, you end up encountering almost all of them.

Ahahah, ladies, always whining about how they can’t find a man, but when a perfectly good one with terrible facial scarring and a dumb self-applied nickname that he makes everyone use walks right into them at the airport, somehow they can’t seal the deal, because they talk too much about themselves or whatever! Probably this is feminism’s fault. If you’re serious about getting married and having kids before your biological clock stops ticking, you need to check out my new self-help book, Play Dirty: How To Turn Your Back On Misguided Gender ‘Equality’ And Snag A One-Eyed Man Who Will Pull You Into His Violent Revenge Plot.

God damn it, Horrible Hank in Rex Morgan isn’t dead after all. We now return you to thrilling tales of dehydration and old-man naps, already in interminable progress.