The great wave of Prestige Television Dramas that started in the late ’00s often presented us with morally compromised antiheroes, like Don Draper or Walter White. These gave rise to a wave of thinkpieces on the topic of “Hmm, Rooting For These Popular Television Characters Is Actually Problematic”, followed by smug counterthinkpieces that informed us that “Oh, Were You Rooting For The Protagonists Of These TV Shows? That’s Not What The Writers Want You To Do”. The problem is that the way these narratives are structured makes it difficult for you not to root for them, no matter how bad they are as people: individual episodes and season-long arcs are about the protagonists trying to overcome obstacles; they serve as our viewpoint characters in the show’s world, and so it’s almost impossible to not want to see them succeed, if for no other reason that failure might mean an end to the pleasure of watching the show.

Anyway, anyone who wants to really work at writing an antihero protagonist that their audience will eventually turn on could do worse than read the last couple weeks of Funky Winkerbean. The title character is up against the Bureau of Motor Vehicles, perhaps the easiest bureaucracy to use as a punching bag, and yet in every single conflict he encounters, he comes off looking worse than the dead-eyed functionaries who oppose him.

Oh snap, it looks like Chris is travelling back to the U.S. to do a little hunting of his own … hunting the most dangerous game, i.e., Mark Trail. Since we spent all last week learning how trophy hunting in Africa is Actually Good, I’m sure we’ll see an even-handed description of how, while the majestic, wily Mark Trail is much beloved, he can be a danger to humans living near his territory and must be occasionally culled to preserve ecological balance.

AHHHHH PICTURE OF YOUNG MARY WITH LONG HAIR AND HOOP EARRINGS AND HER HUSBAND AHHHH! AND POSSIBLY A PICTURE OF YOUNG MARY WITH BELL-BOTTOMED JEANS ON THE NEXT PAGE??? Remember, Mary is canonically 60-something, which means that she spent her young womanhood in the 1970s, presumably smoking weed and listening to Led Zeppelin, which in turn means that you — yes, you — are impossibly old. Sorry, I don’t make the rules!

Is your special plan to give it back to the people who the Brush and his accomplice tried to steal it from? Much as I would love to see Dick and the Spirit suddenly become dirty cops, that … that probably should be the special plan. 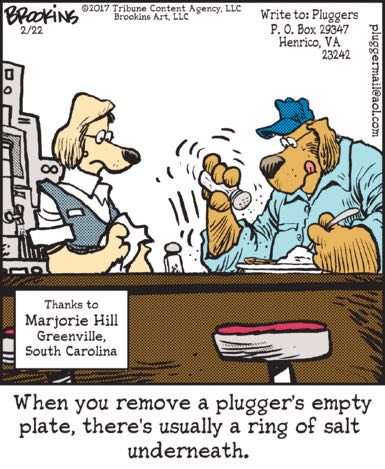 Now that you can’t smoke indoors anymore, pluggers have had to work harder and harder at committing suicide slowly.