Tobey and Mary are enjoying drinks with fruit slices poolside, so technically I’ll consider this a pool party of the sort we expect and deserve when Mary Worth transitions from one plot to another, and anyway I’m in the mood to be forgiving because OH EM GEE MARY AND TOBEY TROPICAL GAL’S GETAWAY MONTH YES YES YES YESSSSSSS! What excitement awaits us at whatever branded resort on a more-or-less coup-free Caribbean island Tobey’s fancy has settled on? Will Mary get her groove back? Will Mary have to forcibly restrain Tobey from getting her groove back? Will Tobey then be allowed to get her groove back when someone points out that college professors don’t as a rule go on month-long “teaching summits,” certainly not in the middle of the semester? It’s going to be amazing!

This is the first good look we’ve gotten at Tobey under the new artistic regime, other than our brief glimpse of the Camerons’ weird, poorly lit Christmas. While I’ve generally been a fan of the new-look character design, I’m not sure I’m into this one? Other than the hair, she seems possibly based on Emma Stone: 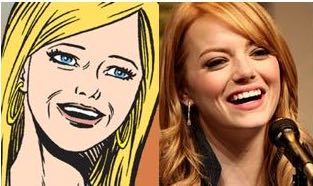 She’s a little too lively looking for my taste, to be honest. The eyes of the Tobey I know and love manage to both project a certain anxious vapidity and seem always haunted by the realization that Tobey’s spending her best years married to Ian Cameron, and those best years are about to run out.

Over in The Phantom, Lee Falk is busy pounding out an exciting new adventure on his old manual typewriter. A new adventure where the Phantom is going to die! …in a prophecy? Is it just going to be a lot of sitting around the Bandar village and Old Man Mozz telling an elaborate and possibly gruesome story about the Phantom’s death and him thinking “Jeez, what’s the social protocol here, like am I supposed to be freaked out or stoic or what?”

Speaking of prophecies of death, looks like Funky’s being drawn by some unnamable force to walk up to the the creepy old house on the top of this overgrown hill on the outskirts of town! I sure hope he doesn’t plunge into a world of hellish horror beyond imagination and is subsequently never heard from again!