(Hey! What’s with the new site design? What’s this business in the top menu about “membership?” Get all the info here!)

Guys, apologies that Important Website Development delayed my return to comics blogging for [looks at watch] 16 days?!!??!?!?! Holy cats, that means a lot of strips to tear through in my traditional beginning-of-the-year comics recapping of the stuff I missed in the continuity strips. Let’s get to it!

One of my favorite things about Gil Thorp is how Coach Thorp and Coach Mrs. Coach Thorp used to have two hideous children who appeared on their Christmas card with them, and now those children don’t appear on said Christmas card anymore and also anywhere else in the strip. What do you think is the most likely fate of the Thorplings?

Wilbur, meanwhile, in Antarctic exile and unaware that Iris has very quickly moved on, looks at the stars and takes solace that, despite the vast distance between them, he and his beloved are both under the same sky. They’re not, though! There are totally different constellations in the Southern Hemisphere. You have nothing in common anymore, Wilbur! Nothing! 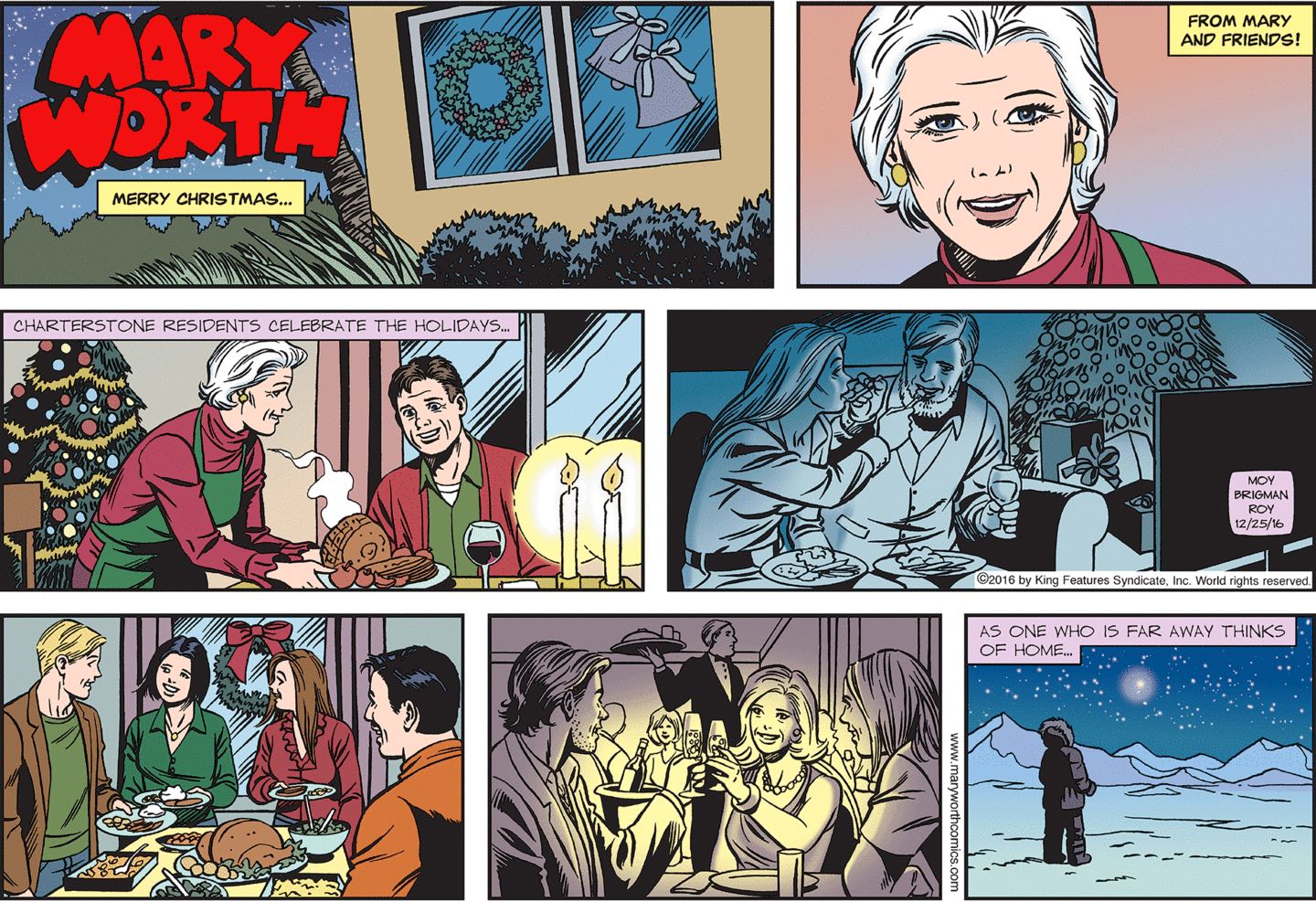 Back at Charterstone, we get what I think is our first glimpse at the new art team’s rendition of Dr. Jeff and the Camerons. And it’s a doozy of an introduction! Dr. Jeff is wide-eyed in wonder and delight at the sight of the monochromatic Christmas ham Mary is presenting him with; meanwhile, the Camerons are celebrating the holiday in the traditional manner, by watching TV in the dark and feeding each other off of plates balanced precariously in their laps, an image that will haunt me (and, I presume, all of you) for years. 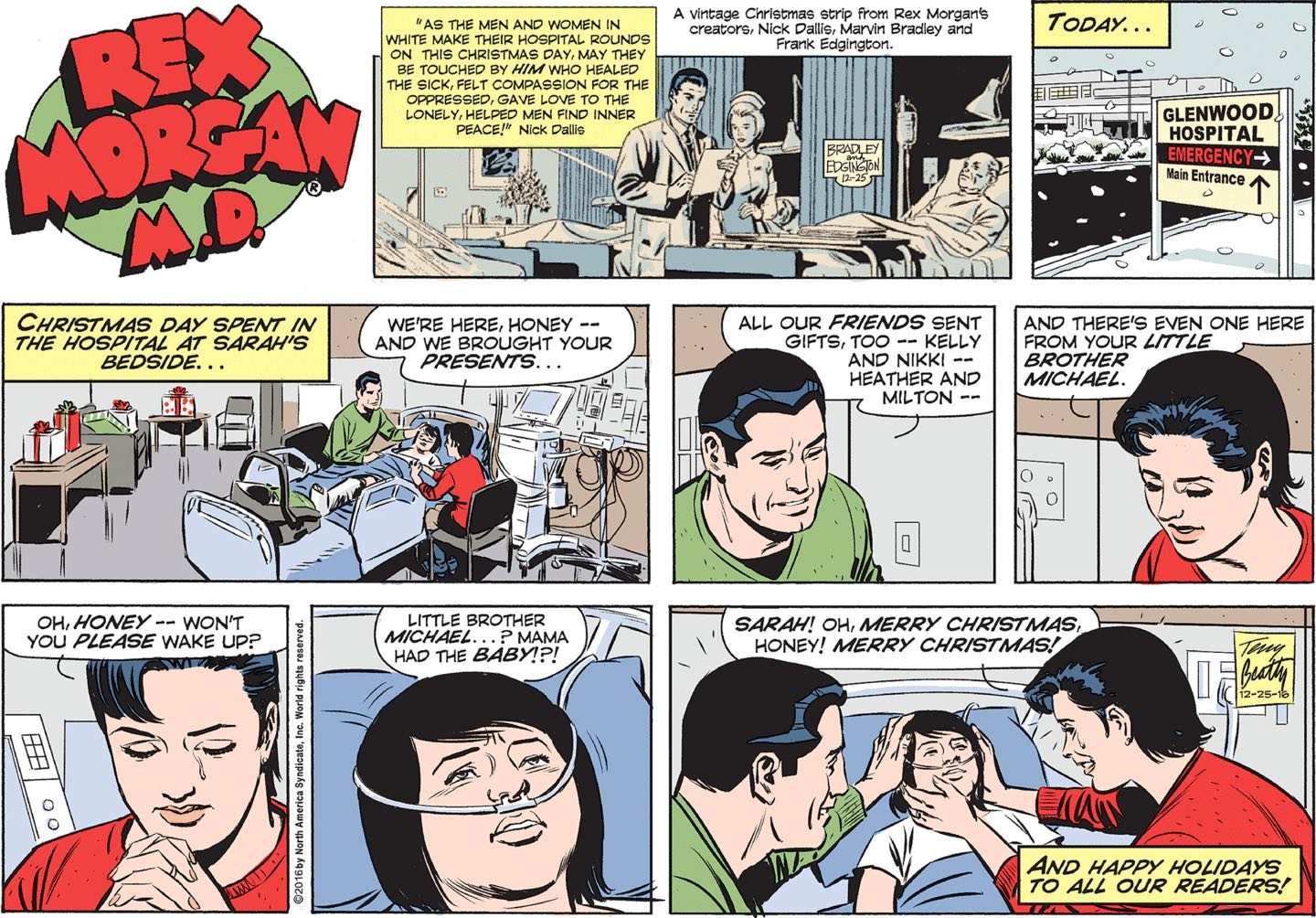 Bad news! Sarah has amnesia! Actually, if she ever gets called to testify against her erstwhile mob associates, that’s still good news.

By the way, despite last year’s brief return to form, Curtis honored its recent tradition by failing to honor its longer-established tradition and spinning an insane Kwanzaa fable, unless you consider this tale of urban real estate to the be the insanest Kwanzaa fable of all.

New-look Dick Tracy continues to milk that comics nostalgia for all it’s worth, bringing the Spirit on for a guest spot and providing red-hot brightly-colored-hat-on-brightly-colored-hat action. Anyway, here’s Dick telling his counterpart that he’s a tool of the state, imposing the harsh order that a sullen citizenry secretly wants but could never bring itself to ask for.

Whoops! Iris is going to a concert with Zak and his millennial friends, and she overdressed! Like all people born in the early ’70s, Iris has never been to a so-called “rock and roll” show, and is unaware of the socially acceptable forms of dress at such events.

Hey, Mark, maybe you should wait until that boat gets to shore before you start bragging. 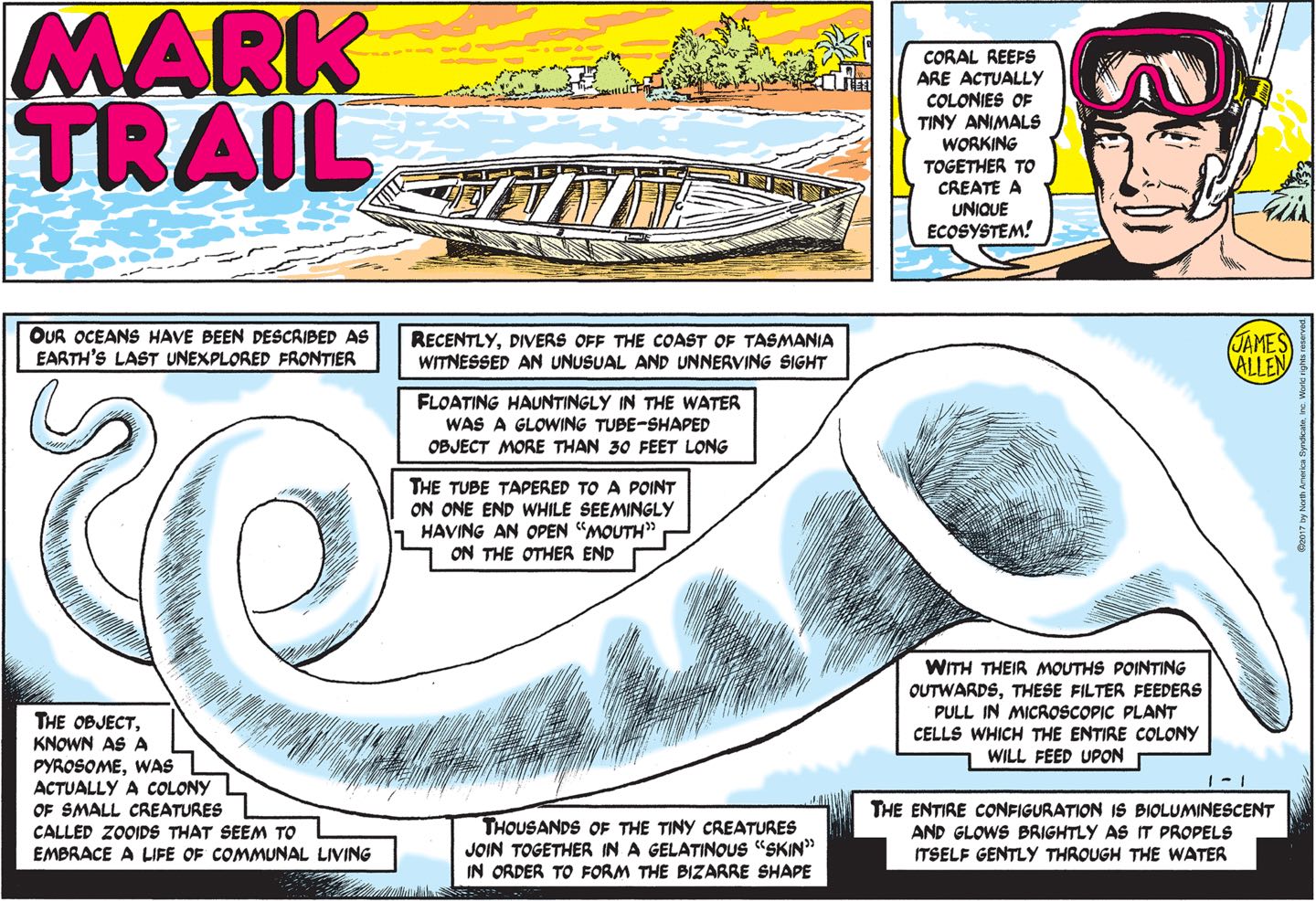 Or maybe the boat is going to get eaten by that nightmarish 30-foot-long gelatinous tube-thing? Ever think of that? That Cherry and Bill will have their nights haunted by the image of you being slowly digested by millions of microscopic mouths and the bill for the boat, respectively?

Oops, looks like we’ve learned why Aaron Aargard is so inconsistent: when he goes to all those warehouse raves, he’s totally high on drugs! According to this Three’s Company-style accidental overhearing of a partial conversation, anyway. It’s even money that “Molly” is actually his girlfriend, whose name is Molly.

Oops, never mind, Mark mentioned his wife and Iris was reminded that Wilbur exists, all eroticism has been aborted with extreme prejudice.

Oops, the mysteriously returned Sophie stumbled upon Sam’s crazy person conspiracy board! If she’s the know-it-all we all remember and love, she’s hopefully going to critique all the many ways he screwed this up. By the way, there are few large-font headlines I can think of that would be more hilarious that “VAN FOUND.”

OH NO, SARAH’S AMNESIA TOOK AWAY ALL OF HER ART SKILLS! She is working overtime to prove, to whoever might want to know, the cops or the FBI or the DA or whoever, that she doesn’t know anything about any mob ladies or any art forgers in the employ of said mob ladies, no sir.

Hey, remember how the young people in Crankshaft bought that old movie theater? Well, they’re having sex in it now. Young people! Is there anywhere they won’t have sex?

Anyway! I’m back and I’m blogging again and my 2017 resolution is the same as it always is: to keep writing jokes about the comics until they make me stop! Brace yourself for another fun year!