No Star Wars puns from me this May the Fourth — isn’t that worth a couple bucks? I thought so! 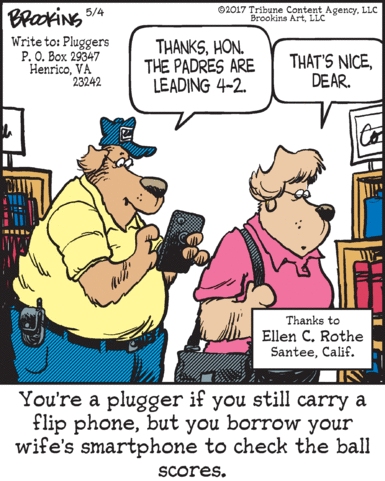 Not sure what they’re going for here: “Pluggers want all of technology’s benefits with none of the intellectual investment?” “Pluggers parade their ignorance as a point of pride?” “Pluggers are lazy hypocrites?” “Pluggers’ wives are somehow not pluggers?”

Wait, they’re at a bookstore? Ha, ha what a couple of pluggers!

Six Chix rotates through a roster of six woman author/artists on weekdays, and separately on Sundays — sort of like girls’ softball in Gil Thorp. Here’s the current lineup, highlighting a couple of recent changes:

The rotation gimmick is really clever: at its best, it lets each Chik contribute fresh work without the pressure of daily deadlines. But at its worst, it lets the strip become an afterthought, with dashed-off artwork supporting a weak concept. A lot of recent strips boil down to “look at this thing I don’t like!”, punctuated by a knowing glance between the characters or at the audience.

Maybe before publishing one of these, the Chix should apply a variant of the Bechdel Test: if two woman characters are talking, and it’s not about men, is it about anything else?

Hm, I seem to be posting a lot of Pluggers this week. It can’t possibly mean anything, though.