It’s pretty clear what’s happened here: our hapless colorist, befuddled by Mudlarkian banter and unable to tell Trey Davis and Jaquan Case apart when Trey’s mohawk isn’t in view, and made the fateful mistake of emblackening Trey’s partially visible profile in the third panel. Still, it’d be a lot more interesting of Jaquan didn’t just have minor knee surgery, but also a dissociative personality disorder that results in multiple identities jockeying for control. “Maybe I’ll return to the NBA–” [much deeper voice] “IGNORE HIM” “No, I’m just–” “HE’S HAVING AN EARLY MIDLIFE CRISIS” “I can’t let this happen aga–” “KILL! KILL! KILL!” 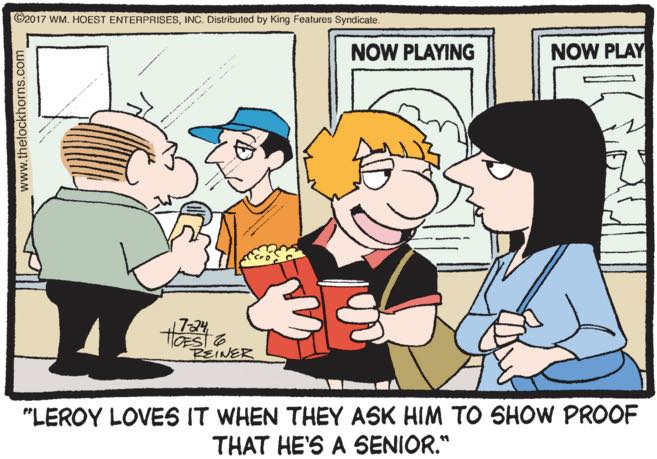 I’ve always been comfortable actually having very little idea about how old the Lockhorns are supposed to be, but I’ve also always been sure that they’ve been somewhere in the 35 to 50 range. Today’s panel seems to undermine everything I thought I knew, though. Unless Leroy has made himself a fake ID so he can get senior discounts? That’s why he loves it. He’s proud to show off his handiwork!

Ahh, yes, it’s the classic cartoon trope, where you do a riff on the stereotypical adultery discovery where someone blurts out “My wife … and my best friend!” after walking in on them in bed together. Lotta variations have already been done, though! So why not do one where a lady comes into the bedroom and apparently sees a dog having sex with a giant, nightmarish arachnid, a scene that apparently makes her smile slightly and flutter her lashes while the dog looks at her sheepishly and the tick writhes on its back under the covers? Why not do that? Why not print it in newspapers across the country? Why not let everyone know that you thought about it, and drew it, and think it’s funny?