It’s not a secret than the world of newspaper comics is small and getting smaller, and that I’m the only person who’s written about newspaper comics every day for the last 13 years, so obviously I’m on the radar of a lot of comics creators. And sometimes they let me know that they’ve taken notice of me, by means ranging from outright hostility in the comic itself to sending me free stuff in the mail in a successful attempt to get me to promote their branded products. So whenever someone who looks kinda like me pops up in a strip, I think, “Hmm, is this someone who looks kind of like me … supposed to be me?” Generally things are made more ambiguous by the fact that my look isn’t exactly the least common around. Anyway, if this redheaded goateed doctor is in fact supposed to be my in-strip avatar, I take that as a compliment, as he seems supportive of his colleagues, a quality I admire and aspire to. Also the artists have noticed that I started wearing glasses last year, nice job!

One thing I (or my alter ego) won’t have to worry about is being the object of Dawn’s moon-eyed affections, which is I assume where this plot is going, since the Dawn plots always seem to involve her sad romantic life in some way, whether it involves her slapping people she was actually dating when she discovered them two-timing her or prolonging weird, sexually charged friendships with various amputees and adjunct community college faculty members. Our beardy doctor is clearly just passing through this plot to establish the awesome diagnostic prowess of the handsome Ned, who can swiftly identify rare and obscure maladies but also grows his hair long enough to cover his ears, because he doesn’t care what The Man thinks. Just the sort of fella to catch a young girl’s fancy, if you know what I mean, and you will definitely know what I mean after Dawn mopily falls in love with him for the next six to eleven weeks. 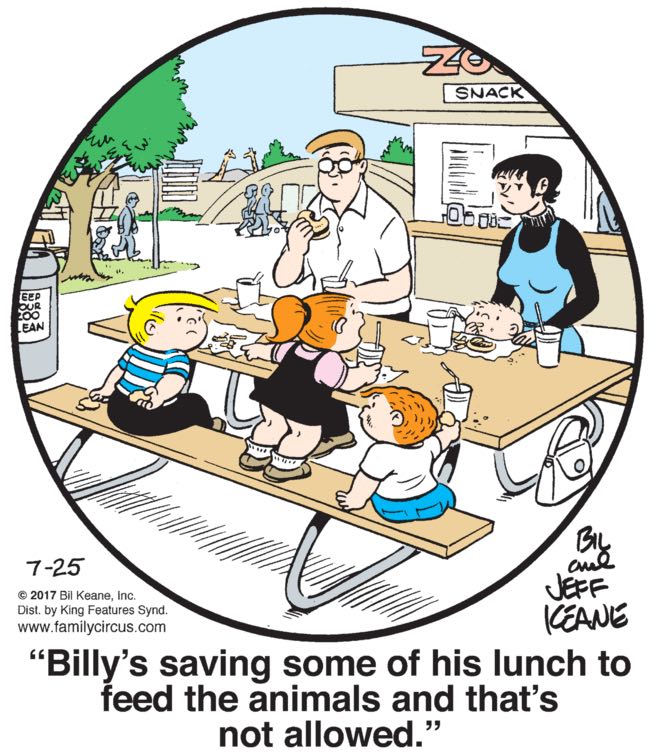 Aww, Billy was going to feed that human finger to one of the tigers and make its whole day. Why you gotta be such a narc, Dolly?

You know, I had a post all planned out today about Funky Winkerbean and Crankshaft, and how the decade-wide time discontinuity between them is increasingly irritating — I even had some reference data about the average price of movie tickets over the years! — but then I realized that I was failing on my stated intention to not actually care about that, at all. They’re getting inside my head, man! So instead, here’s today’s Beetle Bailey, which is about how Otto the dog hates cat beatniks but sure wants to fuck sexy lady dogs. Also, this sexy lady dog may be a prostitute.