I don’t want to just throw around my big-shot Hollywood insider knowledge, mostly because I don’t have any, but a “sizzle reel” is in fact … not whatever today’s Funky Winkerbean thinks it is? It’s generally a short video cut together from clips from other things aiming to sell or promote something to producers or casting directors, not the general public. You usually hear the term in connection with actors, who will have a sizzle reel of their best performances available for people thinking of hiring them. For a whole movie, a sizzle reel is something that would be created long before any filming actually took place, often pieced together from short scenes from other films in an attempt to show potential financial backers what the final product might look like. (Here’s one for the 2012 film Looper to give you a sense of how they work.)

Needless to say, movie sizzle reels generally do not include footage from documentaries about washed-up actors playing minor roles in the film, and they definitely aren’t put together right in the middle of what has appeared to be a very long and well-funded shoot. I can only assume that the financial backers of Starbuck Jones: The Movie, after viewing the dailies with despair, have abruptly pulled out, and the producers are desperately trying to find new funding, which they won’t because they have no idea what should and should not go into a sizzle reel. 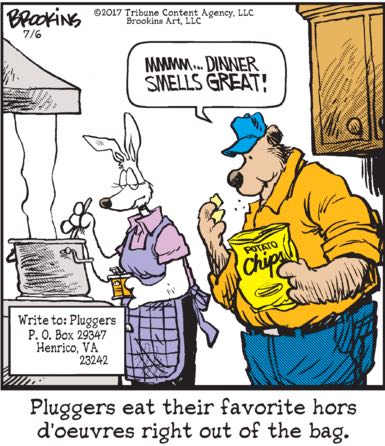 My longstanding theory is that Sheila Roo, a kangaroo-lady who suffers the indignity of being rendered in white by syndicate colorists who think she’s a rabbit, is not of true plugger stock, as indicated by her employment at a job that requires a suit and her desire to eat at non-chain restaurants. Today’s piece of evidence is the way she looks at her husband with subtle but withering contempt, possibly because of his dietary habits but also possibly because of, you know, just everything.

Meanwhile, Spider-Man is significantly degrading the fire-safety features of a building that never did anything to him.