Oh, hey, sorry I haven’t been keeping you up to date on what’s been going on in Gil Thorp, but trust me when I say that what’s been going on Gil Thorp is exactly the same thing that was going on when we last checked in with Gil Thorp — some Milford kids whose names I am not bothering to commit to memory are trying to make Irish Terry Gallagher into a star, for some reason — and it hasn’t gotten more interesting since. Today’s strip is mostly of note because the plot requires that characters find out information from a newspaper but somebody at some point in the creative process said, “Wait, kids don’t read the newspaper anymore, do they? iPads, kids love iPads, have them looking at iPads.” 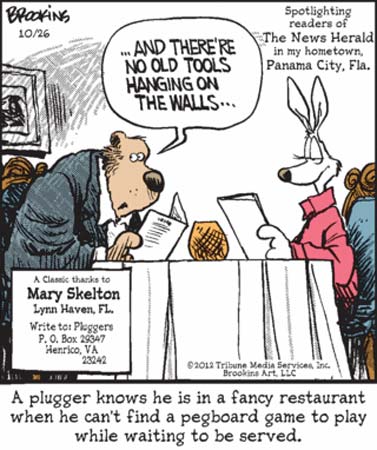 I love the bear-man’s facial expression and body posture of cringing terror here, as he becomes increasingly alarmed that he’s been lured to a non-plugger dining establishment, perhaps as some kind of trap. In fact, the bear-man’s wife is looking pretty smug, and it’s already been established that she’s not of plugger origins, so maybe it is a trap, or at least a deliberate attempt to drag him out of his comfort zone for the dual purpose of eating some non-deep-fried food for once and also seeing him squirm a little.

(Side note: I’m vaguely embarrassed to even know this, but Mrs. Bear-Man is actually supposed to be a kangaroo; I think the colorists have misinterpreted the ears and guessed that she’s a rabbit, thus the white coloring. Either that or the years of hated she-plugger existence have turned her normally brown pelt prematurely grey.)

Hmm, how to distract readers from the fact that Peter’s logic — “Kraven will steal that diamond tiara! Except, wait, that doesn’t seem like the sort of thing Kraven would do at all? Looks like I’m going to have to figure out why he’s going to do the totally out-of-character thing I’ve just arbitrarily decided he’s going to do!” — is completely insane? Hey, why not have Peter take off his teal suit jacket, hang it up on a weird, ill-drawn blob on the side of a building, and put on an electric blue suit jacket? Perfect! That makes even less sense!

“And I don’t care how much of the world has to be destroyed to lower those gas prices, as long as I don’t have to see it!”