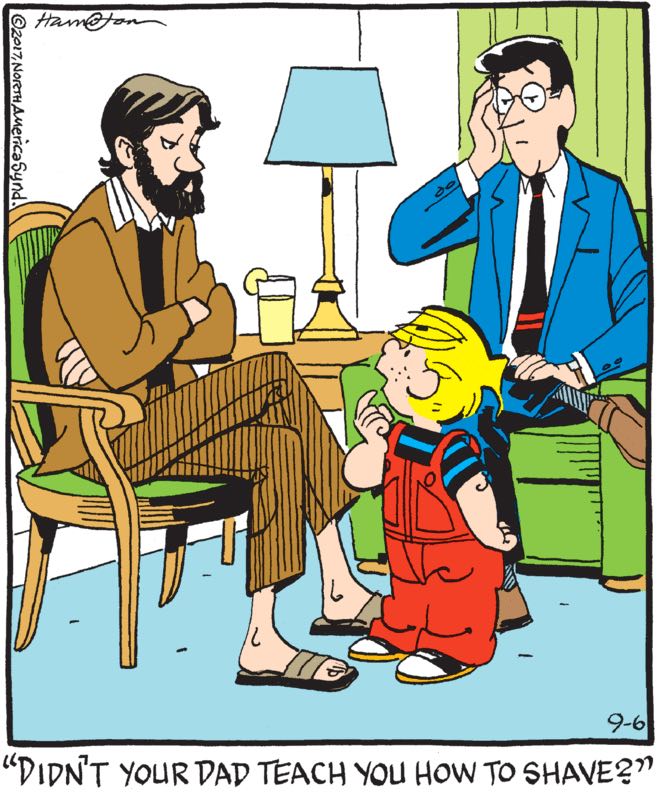 Over the years, the overarching ’50s aesthetic and cultural milieu in Dennis the Menace has gone from “it was actually created in the ’50s so it was contemporary at the time” to “creative staff is aging out of awareness of contemporary culture, or maybe is trying to maintain a consistent tone” to “active indulgence of nostalgia, Mad Men style.” Even so, I find today’s panel particularly baffling. If this were actually published in, say, 1967, I’d describe it as “someone trying to draw a hippie who’s heard of them but never actually seen one and who is physically incapable of visualizing a man leaving the house without wearing a suit jacket,” but since this was in fact produced in the year 2017, I have to imagine that it’s … trying get inside the head of such a person from 50 years ago, who’s heard of hippies but etc.? Anyway, assuming we are in the early-to-late-mid ’60s window, the extremely mildly shaggy grooming plus earth-tone suit over sweater and dress shirt says “junior faculty at local liberal arts college” but the sandals say “our Lord and Savior Jesus Christ, returned to judge the living and the dead from His position as a junior faculty member at the local liberal arts college.” “My Father taught me many things, but the need to conform to the transitory grooming codes of this world was not among them,” the Son of Man thinks to Himself.

Speaking of Jesus, Mark seems to think that he’ll be safer from the coming twister underneath a house of worship, while our nefarious criminals have only one thing on their mind: getting as drunk as possible on whatever leftover booze has been aging deliciously over at the saloon in the decades since this entire town was abandoned. Mark’s going to feel pretty pious down there in the church basement, right until he realizes it’s part of the underground tunnel system where the Samson the biblically named but still bloodthirsty bear lives.

This strip has done plenty of strips about General Halftrack’s incipient dementia, but I think this is the first time we’ve actually seen one of the other characters cruelly laughing at his doddering panic.

It has come to my attention that some of you think that maybe this whole “Dr. Ned is still married” thing is a big comical sitcom-style misunderstanding, and that Jared overheard him talking to his daughter or something. It’s possible, I guess, but as contrary evidence let me point out that for their big dates Dr. Ned has taken Dawn to French restaurants called “The Love Dog” and “The Dishonest Snail.” This strip generally isn’t subtle, guys.