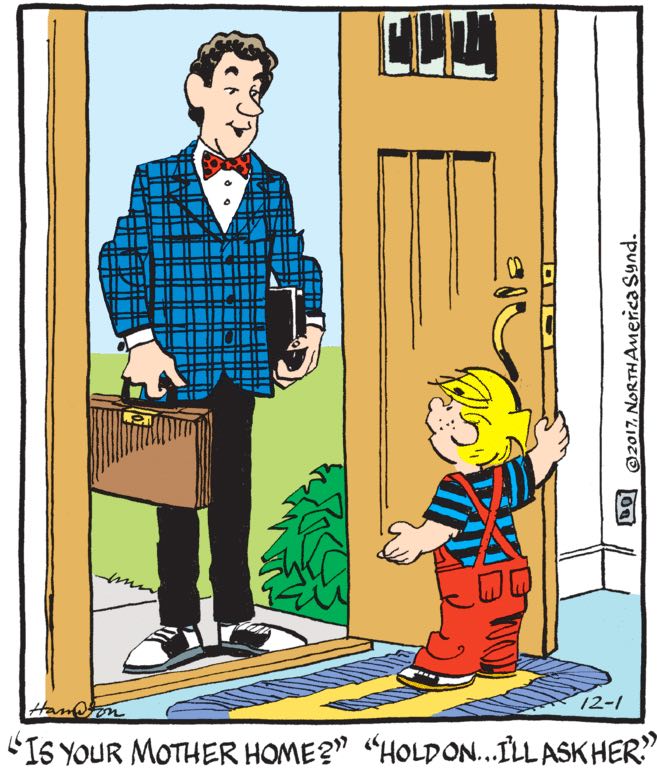 Despite the strip’s occasional acknowledgements of modernity, a large part of the appeal of Dennis the Menace, to the extent that such a thing could be said to exist, lies in its depiction of a retrograde, bygone world that is comforting to its elderly readership but would be wholly alien to actual five-year-olds. This is a neighborhood, after all, where children of various ages are allowed to roam unsupervised seemingly at all times, which must seem very weird to any children reading it (fortunately no actual children are reading it). Today’s panel has a whole series of anachronisms:

Anyway, I guess the joke here is that Dennis has blown his mother’s cover when she’s trying to avoid talking to a salesman, which only makes sense if we find #5 there believable, and which I guess makes Alice the true menace, since she’s sent her child to the door to run interference with some rando while she stays upstairs in the bedroom huffing laudanum or whatever. I think a more modern and menacing version of this joke would be Dennis saying he was home alone and asking the salesman to call Child Protective Services, just because he wanted to go for a ride in a car. 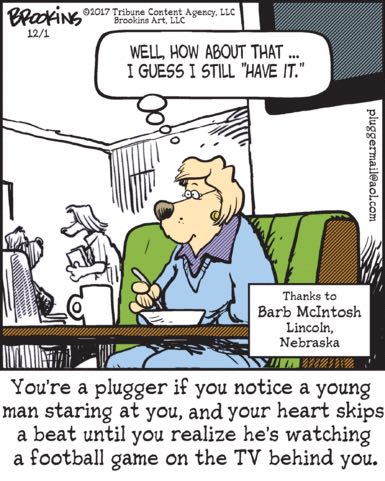 Today’s Pluggers fascinates me: it tells a whole little story in its caption, but in the panel itself depicts the moment before the denouement, the moment when its plugger protagonist allows herself to briefly entertain the idea that someone might find her desirable, before it all comes crashing down in a moment of internalized embarrassment. In its own quiet way, this is just as grim and heartbreaking as that crushing Pluggers classic, “Rhino-man hocks his TV.” 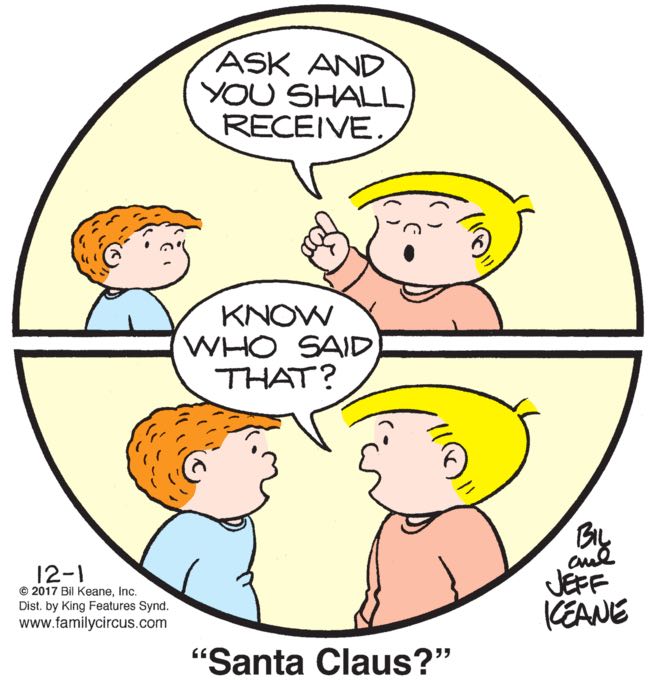 Family Circus has a reputation for being one of the most Christian comic strips in the newspaper, and yet here it is depicting a child confusing our Lord and Savior Jesus Christ with the pagan fertility god whose iconography has, through the corruption of this world, been grafted onto what should be the subdued celebration of His birth, and then playing it for laughs. I guess this is just meant to show us that children really are born sinful and ignorant, doomed to Limbo without the interceding grace of Christ, working through the Holy Mother Church and its variety of reasonably priced educational programs.