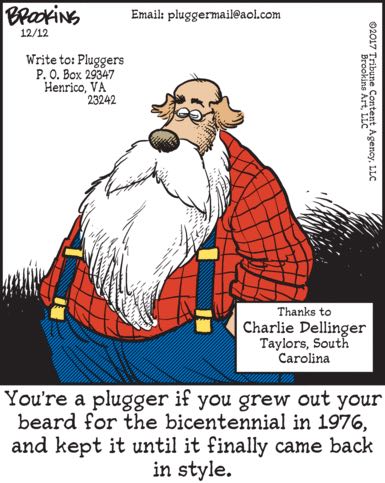 Fine, I’ll admit it, I’m not ashamed: I learned something from Pluggers today, because I didn’t just stare at it uncomprehendingly in dull horror and say “what gibbering madness is this?” before moving on to Piranha Club. In fact, I discovered that, according to this retrospective 2016 article in the Michgan-based Jackson News, beard-growing contests for the Bicentennial were a thing, confirmed by this 1996 post on the alt.culture.us.1970s usenet group where someone in Alabama remembers similar informal beard-growing competitions. Side note: isn’t it crazy that that 1996 post is closer in time to the Bicentennial than it is to today, but I can’t remember 1976 because I was a toddler and it was decades ago but I remember 1996 very well because I was an adult and it was very recent? Funny how this world works! Ha ha! Anyway, my point is that yes, “Bicentennial beards” were a real thing, with millions of American growing huge beards to honor our founding fathers, who were, to a man, clean-shaven. The ’70s were wild, guys.

It seems Wilbur called Iris at breakfast time to try to make dinner plans with her, which I guess explains the robe, and somehow I find it extremely hilarious that Zak is over there enjoying some delicious, healthy All Bran to start his day after an evening of vigorous and mutually enjoyable sex stuff. Not sure if he’s thinking “Dag, this is what happens when you sleep over at an older lady’s house, she doesn’t have any Cocoa Pebbles or anything,” or if it’s more “You know what, I’m a successful businessman now, I’ve cut my formerly flowing locks, so maybe it really is time for me to start pooping on a regular schedule.”

Oh, uh, this Gil Thorp storyline is still happening, huh? Well, just to catch you up, Uncle Gary really wants to Rick Soto to have a concussion, so that Rick will be forced to quit football forever and dedicate himself full-time to becoming a YouTube singing sensation. Unfortunately for this not-at-all insane scheme, multiple doctors have now insisted that Rick hasn’t been concussed even a little! Still, I have a feeling this isn’t the end of it: the skull we catch a glimpse of in the background of panel three is definitely of some kind of early hominin, possibly Homo erectus or an Australopithecine, meaning that this doctor is used to dealing with specimens with much more robust crania than our poor Rick and her advice is suspect.