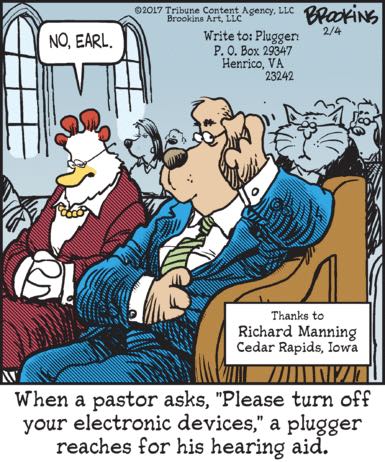 Pluggers today made me realize that it’s been a long time since I’ve been in a house of worship for non-wedding-or-funeral-related reasons — long enough that it never occurred to me that the same people who infuriate me for blithely texting throughout a movie (WHY WOULD YOU PAY $16.50 A TICKET TO SEE SILENCE, A QUIET AND EMOTIONALLY GRUELLING CINEMATIC EXPERIENCE FROM A MASTER FILMMAKER, ON ITS OPENING WEEKEND, AND THEN BE ON YOUR PHONE THE WHOLE TIME? YOU’RE A GROWN-ASS ADULT! YES, I CAN SEE YOU!) also do it while they’re at church, to the extent that beleaguered clergy have to beg parishioners to put their gizmos in their pockets for just a little while, for pete’s sake, just how flight attendants have to specifically point out that you can’t vape in 30,000 feet over Nebraska or whatever.

And, while my irreligion probably differentiates me from most pluggers, I do have to say that as a person with a hearing aid I very, very strongly related to today’s panel. Like, the ability to turn a hearing aid off is easily one of the top five best things about having one. It’s not that I can’t hear with it off, but … well, it’s sort of like when you open a beer right when you get home from a hard day’s work. Your problems don’t go away, but it takes the edge off, you know?

I know it’s something I harp on a lot, but the emotional disconnect between the jokes and dialogue in Shoe is one of my favorite bizarre things about the strip! Usually this takes the form of the patented goggle eyes of horror in reaction to a punchline, but today’s strip gets even more intense. “Roz, I need something to release all this tension I have” is mildly concerning in isolation; but when accompanied with the Perfesser’s bug-eyed stare, it seems like the last thing you hear a guy say before you become the first victim in his multi-state killing spree.

Oh my God, Iris just told Zak she loves him … in German! Safe in the knowledge that sweet, dim, uncultured Zak would never in a million years understand it! This is a delight because it’s a move she chose to make wholly predicated on her boy-toy’s ignorance, but it makes me sad because it probably means she’s going back to Wilbur when he blows back into town. Hopefully he hasn’t picked up any nasty Antarctic venereal diseases!