Hey, did you know that Les isn’t the only writer in the Funkyverse cast of characters? Harry Dinkle dabbles as a wordsmith as well, except instead of churning out endless paeans to his dead wife, he’s writing a novel about fictional musical pioneer Claude Barlow, and by “writing a novel” I mean he’s just stringing together a disconnected series of terrible and increasingly incomprehensible puns. This has been going for several days, and while today offers no respite from the onslaught, it at least provides a little visual interest, with panel three offering a terrifying vision of what it would be like to actually be a bunch of unpublishable and unfunny beats in a never-ending shaggy-dog story about someone named “Claude Barlow.” 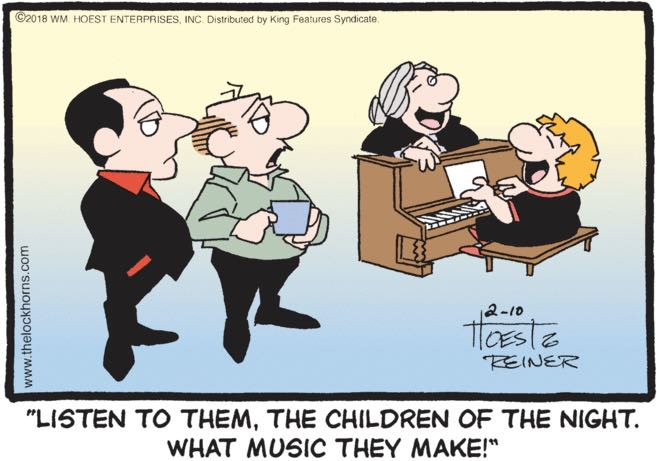 Shoutout to the Lockhorns for being the second syndicated comic to make a reference to a classic scene in the Bela Lugosi Dracula in less than a year, I guess? Anyway, my take here is not so much that Leroy is insulting his wife and mother-in-law’s singing or ever comparing them to ravenous wolves, but that he’s instead trying to impress his houseguest, who, with his deep widow’s peak, black-and-red ensemble, and odd overbite, is clearly a vampire himself.