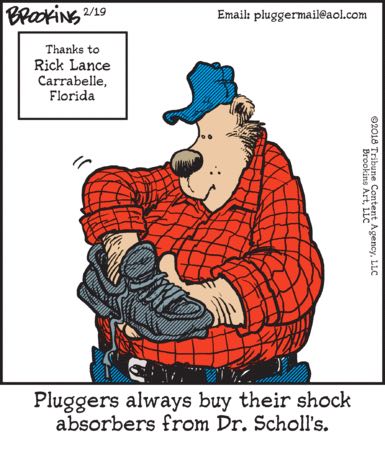 As you know, I’m not a plugger, and one of the ways you can tell I’m not a plugger is that I know jack-all about cars. So, like, when I read this panel, I was confused, because don’t all cars have shock absorbers? Is this panel trying to imply that pluggers have a pedestrian-based lifestyle and shun automotive ownership? Because that seems quite at odds with the image I’ve built up over the years! But, no: it turns out that some cars have shocks and some cars have struts. And maybe some have both? I then contemplated taking the next logical step: doing the research to determine if cars without shock absorbers were more “plugger-y” than those with them. But then I thought, “enh, my dude, you’re just spending time learning about cars.” So I gave up! True story!

“Have you seen today’s paper, Chief Patton? Oh, you haven’t, but you’ve already heard about the murder of an extremely wealthy and prominent citizen? What with you being the chief of police and all? And also we live in a 24-hour news cycle, so even if you hadn’t heard it from police sources you’d probably see it on TV or Twitter or something? Well, whatever, I already had one of my aides buy this paper for visual effect, so God damn it, I’m going to hold it up meaningfully. This is how you hold up a newspaper, right? Very gingery?”