Oh, man, sorry I haven’t been keeping you up to date on Mark Trail, but the short version of the story is that, after showering his giraffe-seeing son and monkey-riding-ostrich-seeing father-in-law with amused contempt and probably not even hearing about the nice campers who got attacked by a rhino, Mark finally saw a tiger with his own eyes and now all of the sudden the situation is very serious indeed and he needs to take charge of it! Based on Mark’s grim facial expression and his determination to stockpile on ammo, look for the tone of the strip to rapidly shift from “zany farce with wacky circus animals” to “gritty Assault on Precinct 13-style seige drama, with wacky circus animals.”

This Mary Worth plot about Ted Miller, sex creep, is doing a good job of simulating having professional dealings with an actual sex creep, in the sense that you have to sit through a lot of boring professional talk on edge wondering when the next hug that lingers right up to the edge of plausible deniability is going to abruptly arrive. Until then, though, I guess we should go back to the extremely improbable story of Mary as a muffin maven, a story that starts with her selling a plate of five muffins at Aileen’s Grocery and ends with everyone involved a millionaire! This story obviously requires Ted to wedge himself onto the loveseat with Mary to tell it, so she can feel the power of his narrative. 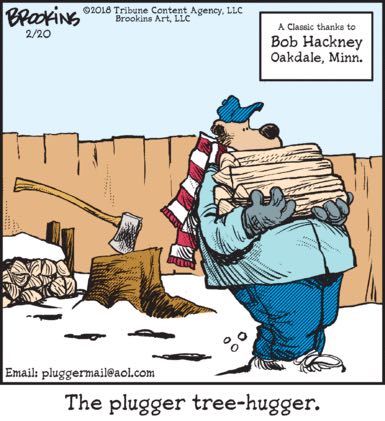 A PLUGGER ONLY HUGS SOMETHING

AFTER HE KILLS IT

AND CHOPS IT UP WITH AN AXE