The central conceit of Hagar the Horrible is that it takes the classic American sitcom husband-wife dynamic and transposes it onto a family living in Viking-age Norway. So the conflicts between Hagar and Helga all revolve around the sort of things that would be at home in America in 1975: he spends too much time at the bar, he doesn’t like her mother, he’s a slob, etc. But tellingly, what they don’t fight about is his role as the leader of a band of opportunistic raiders and thieves, who leave a trail of corpses across Europe in their quest for plunder. Look at her little smile as he heads to the door to cleave the salesman’s skull with a single blow of his axe, then put him out of his misery by stabbing him in the throat. She doesn’t like it when he leaves chicken bones on the floor, but she’s never minded all the killing.

So Marty Moon has reacted to his admonishment at the hands of teens by choosing to … hyper-pronounce Jorge Padilla’s name, as in this classic SNL sketch, and take advantage of getting to actually say a Latino’s name on the air by slipping in sponsored content for a local Mexican restaurant. I’m not sure what’s funnier: that he’s doing this to antagonize his young woke adversaries, or because he thinks he’s being respectful.

“Anybody break a neck or get permanently paralyzed? Any compound fractures, with femurs protruding horrifically from flesh? Tissues sliced so deep that the scarring will be permanent? Massive blood loss? Traumatic brain injury? C’mon, throw us a bone here, sheriff.” 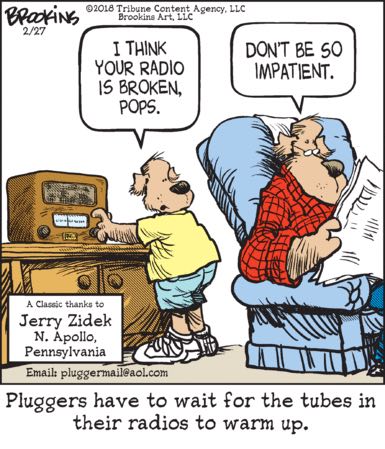 You can tell this is a “classic” Pluggers because the kid still knows what a radio is.

What if an old person … had a mom??? You crazy for this one, Six Chix!