They called it the Day of the Second Sun: one morning, people woke up to see another luminous star blazing in the sky. The disasters began almost right away, of course: the effects on the tides, the ecosystem, the atmosphere, and the Van Allen belts were swift and catastrophic, to say nothing of the corrosive effects of endless day on the world’s collective psyche. But still, in those first few moments of that first awful day, there were a few scattered reactions of naïve hope and even delight.

Man, you ever publish a comic strip for, like, literally 35 years, so long that you basically forget that there was at one point a conceit to the strip, something about fairy tales, or maybe that was only the title and it was never used as a joke, it’s been 35 years so who can remember at this point, but then — but then! — you suddenly come up with a perfect punchline that ties into this long-forgotten strip origin story, and it’s just in time to be only a week too late to be topical? 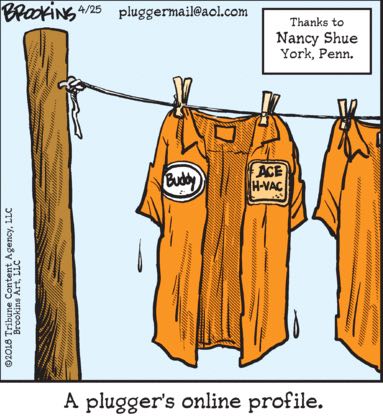 Pluggers have developed their own elaborate version of hanky code, in which the various colors and labels of the work shirts they hang on their clothesline indicate their availability for various sex acts.